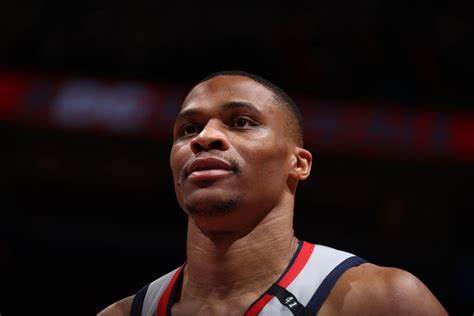 Russell Westbrook is a point guard  for the Washington Wizards. He was born on the 12th of November, 1988 in Long Beach, California.  He grew up in Hawthorne and attended Leuzinger High School. Russ was a small kid size wise and he did not get to start on his varsity team till junior year.

In his senior year however, everything changed. Russ averaged 25.1 points and 8.7 rebounds per game. He helped the team maintain a 25-4 record and also scored 14 double-doubles that season. Russell Westbrook did not have intentions of going all out in college basketball but he got an offer from Ben Howland to play for the Bruins

Russell Westbrook is the sun of Russell Westbrook senior and Shannon Horton. He also grew up with a younger brother, Raynard. Russ’s best friend was Khelcey Barrs. The duo had dreams of playing together in UCLA. However Russ lost his best fiend to an enlarged heart during a pick up game.

At UCLA, Russ wore the number 0 and was a backup to Darren Collison in his freshman year. The following season, Westbrook got an opportunity to start and he did well. He averaged 12.7 points per game and was also named to the All-Pac-10 Third Team. He was also crowned Pac-10 defensive player of the year.

Two years into playing for the UCLA Bruins, Russell Westbrook decided to declare himself for the 2008 NBA draft.

Russell Westbrook was picked 4th overall by the Seattle SuperSonics. The same year the super sonics relocated to Oklahoma. In his rookie year, Westbrook averaged 15.3 points, 5.3 assists and 4.9 rebounds. He had shown the NBA world that he was an all-round player. He finished fourth on the NBA Rookie of the year standings and was also named to the NBA-ALL Rookie First Team.

Russell Westbrook had a great second season with OKC. He averaged 21.9 points per game with 8.2 assists and 4.6 rebounds. He also got called up as a reserve for the Western Conference in the 2011 All-Star game.

In the Following season, Russ was better prepared, he was chosen for the 2012 All-Star game as well. He scored his first career high of 45 points against the Timberwolves. The rise of Russell Westbrook was prominent and he also helped the Thunder reach the NBA Playoffs. They made the finals but lost to Miami Heat.

In the 2012-13 season, Russell Westbrook was someone to keep an eye out for. He finished the season the 23.2 points and 7.4 assists per game.

Before the start of the 2013-14 season, Russ had an injury to his right knee. He missed the first two weeks of the regular season. When Westbrook returned to court, it was a comeback to remember. He put up 14 points. 13 rebounds and 10 assists. During the All-Star break, Russ underwent an arthroscopic surgery for his knee. When he returned to the line up, the star’s playing minutes were monitored to help him ease back into playing. He was also crowned All-Star MVP in 2015. He put up 27 points in 11 minutes.

Russ being Russ came back strong. He with the help of Kevin Durant helped the OKC Thunder  put up a strong fight. However they came up short and did not make the playoffs that season. Russ went on to have many bitter-sweet moments with Oklahoma City Thunder.

Kevin Durant left OKC IN 2017. Russ signed a three year $85.7 Million extension. The season looked like a meal and Westbrook was hungry. He recorded his 38th career regular season triple double in the second game of the season. Russ then went on to maintain a streak of triple-doubles. He pulled it to seven games. Westbrook tied Michael Jordan for the longest streak of triple-doubles.

Halfway through the season, Russ was averaging 30.8 points, 10.7 rebounds and 10.5 assists per game. He went on to  become one of the few players to record 20 triple doubles in  season.

Westbrook carried the Thunder to another playoffs. He scored 51 points in game 2 against the Rockets which made him hold the highest scoring triple double in NBA.  The Thunder however did not make it past round one but Russ’s performance got the credit it deserved. He was crowned MVP in 2017.

The Last Season At OKC

Russell Westbrook had a injury affected start to the 2018-19 season. He returned only to put up 32 points and 12 rebounds. Russ recorded his first triple double of the season against the  Golden state Warriors. He also recorded a career high assist record with 24 assists against the Spurs. The Game secured the spot for league leader in assists per game. He however could not help OKC win a chip.

In 2019, Westbrook was traded to the Houston Rockets where he was re-united with friend and former team mate, James Harden. The duo loved playing together. Russell Westbrook put up 24 points and 16 rebounds in his debut for the Rockets. On the 3rd of January in 2020, Westbrook went on to become the third player in NBA history with 19,000 points, 6,000 rebounds, and 7,000 assists.

The NBA season was suspended in March due to the pandemic and Westbrook was also affected. He tested positive in July but recovered just in time to join the Rockets in the bubble. However he missed the first four playoff games due to a strain in his right qua The  playoff season was a nightmare. he averaged only 17.9 points,  7.0 rebounds and 4.6 assists per game.

Russell Westbrook At The Washington Wizards

Both James Harden and Russell Westbrook were not happy at the Rockets. While James Harden moved to Brooklyn nets, Russ signed with the Washington Wizards. Russ teamed up with Bradley Beal and he helped the Wizards reach he 2021 playoffs. During the season, Westbrook broke records in style. He became the only player in the history of the NBA to have 15 triple-doubles in 20 games. He also passed Robertson to hold the record of most triple doubles in a career. Russ currently has 182 triple-doubles. Westbrook earned the title of Mr. Triple Double.

The Washington Wizards lost against the Boston Celtics in the first play-in game and then went on to blowout the Pacers to clinch the final playoff spot. However the Wizards were eliminated in round 1

Russell Westbrook’s Net worth and Endorsements

According to sources, Russell Westbrook has an estimated net worth of approximately  $170 Million.  He signed with the Jordan brand in 2012 and featured in a commercial as well. He signed a ten year extension with the same brand in 2017. This became the largest total endorsement deal any athlete has received from the brand. Russ also signed with Kinds and Jaxs Boxer Briefs. Russ was named the Marketing Creative Director for True Religion and became the global face for the Mountain Dew Kickstart after signing with PepsiCo.

Russell Westbrook has a wonderful family. He is married to Nina Westbrook, who was his girlfriend in UCLA. The couple have three  children together. Their names are Noah, Skye and Jordyn. Nina is also a huge sports fan and has specialized in clinical psychology.

In 2018, gave us a peak at Russell Westbrook’s signature shoe. The shoe was called the Jordan Why Not Zer0.1 . The shoe is both style  and game. It not only makes you look good on court but also protects the ankles while a player makes his fancy plays. 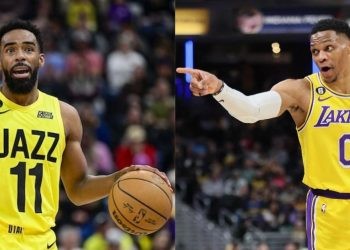 The Los Angeles Lakers are looking to make some moves as the NBA trade deadline is almost upon us. Fans ... 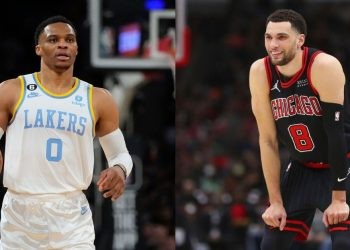 As the NBA trade deadline approaches, LeBron James' Los Angeles Lakers might just end up making another move. Fans will ... 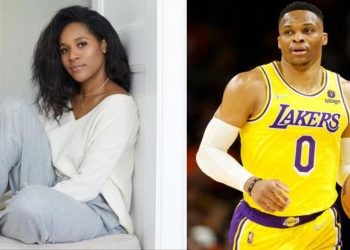 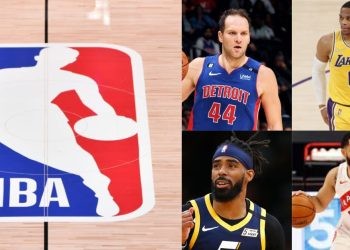 The trade deadline is a time of excitement for many NBA fans. It’s the time when general managers must make ... 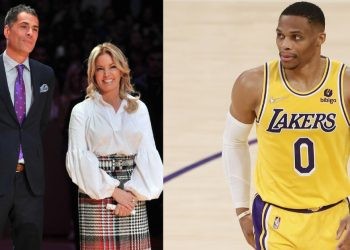 The Los Angeles Lakers might still end up trading Russell Westbrook to another team if their season continues to go ... 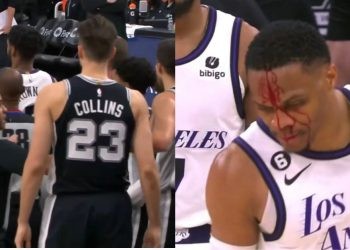 The Los Angeles Lakers vs San Antonio Spurs game did not disappoint. LeBron James was only probable to play according ... 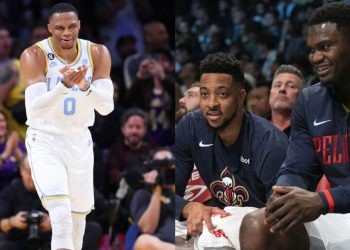 Russell Westbrook and the Los Angeles Lakers are all set to take on the New Orleans Pelicans for their next ... 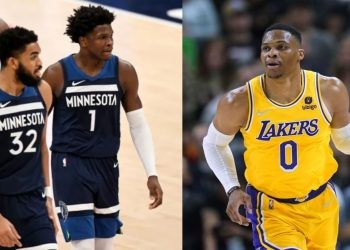 The 2022-2023 NBA season has not started well for LeBron James, Russell Westbrook, and the Los Angeles Lakers. Despite making ... 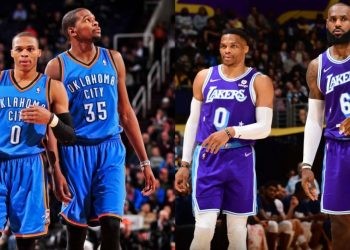 The Los Angeles Lakers have kickstarted their 2022-23 NBA season and it hasn't gone well so far. After missing the ... 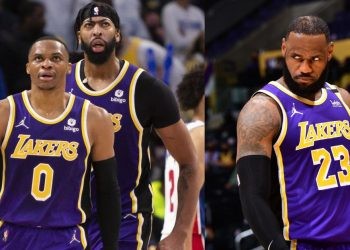 LeBron James is coming off one of the most disappointing years in his NBA career. His team, the Los Angeles ...