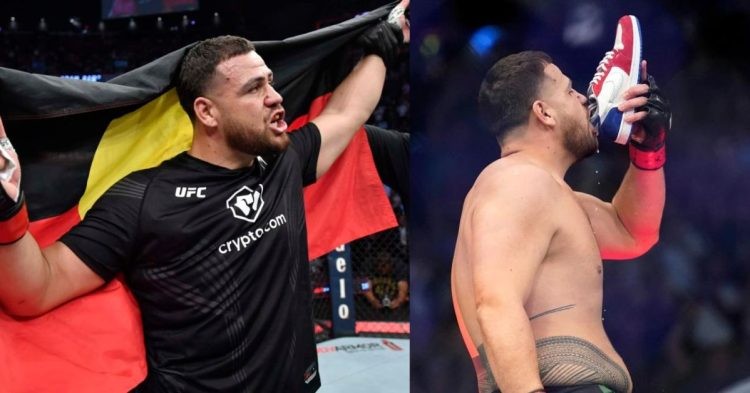 UFC heavyweight star Tai Tuivasa is one of the most famous fighters in the promotion and is known for his slick striking skills and banger performances inside the octagon. However, another thing that has made ‘Bam Bam’ famous is his ‘shoey’ trend.

What is a ‘shoey’? It is the act of drinking beer from someone’s worn shoe which generally is a symbol of celebration. This practice is very popular in Australia and Tuivasa, being an Aussie, has made this a trend in the UFC.

When Tuivasa finishes a fight, he will climb on top of the cage and do his signature victory celebration. The Australian once revealed that he never uses his own shoe, the trick is to drink from someone else’s shoe –which some people think is very disgusting.

Tuivasa once did a shoey using a random fan’s shoe. He also once requested UFC color commentator Joe Rogan’s shoe but he turned it down calling it disgusting.

Celebrities who have done Shoey with Tai Tuivasa

After this trend set by Tai Tuivasa in the UFC, many fighters followed with this shoey trademark. When Tuivasa faced off with Ciryl Gane before their fight night, they posed together doing a shoey in front of the Eiffel Tower.

UFC president Dana White once also did a shoey with Tuivasa. Following a successful UFC 271, White joined ‘Bam Bam’ for a shoey after the Australian knocked out Derrick Lewis.

Tuivasa can be often seen doing shoey with the fans. Also before the fight, in the weigh-in show, Laura Sanko, Daniel Cormier, Michael Chiesa and more did ‘shoey’ and got Tuivasa to rate them.

Tuivasa once tried a shoey with Dustin Poirier’s hot sauce, something he regretted later!

Bruv, Tai Tuivasa did a shoey with Dustin Poirier’s hot sauce in the mix! 😱 pic.twitter.com/xAwaHzbcmY

It’s not that Tuivasa only does shoey when he is fighting. He can be often seen attending UFC events and when the camera pans to him, he’ll hit a shoey. Tuivasa once also got Cub Swanson to do a shoey with him when they were attending UFC 245. However, it looked like Swanson really regretted the decision later.

After a successful UFC 273 main event, fellow Australian Alexander Volkanovski did a shoey. He beat ‘The Korean Zombie’ in a dominant fashion and chugged beer out of a shoe backstage.

UFC middleweight star Israel Adesanya also joined the trend. While attending UFC Adelaide, ‘The Last Stylebender’ was seen hitting a shoey. At UFC 234, Donald ‘Cowboy’ Cerrone did a shoey but he used a cowboy boot that suits his nickname.

‘Bam Bam’ once got WWE legend Steve Austin to approve his post-fight celebration. ‘Stone Cold’ Steve Austin was famous for chugging beers after fights or when he made an appearance.

Tuivasa’s celebration is viewed as disgusting by many, however, when the Australian does his trademark celebration, the crowd loves it and many celebrities have joined this trend. Tuivasa is set to face Sergei Pavlovich at UFC Orlando and we will see him do another shoey if he gets a win.