Tai Tuivasa Weighs 273 Pounds Ahead of His Next Fight at UFC Paris, Can Ciryl Gane Overcome the Massive Weight Difference? 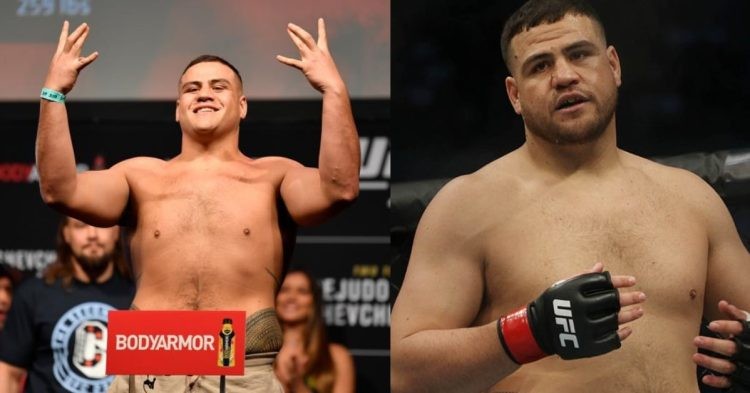 Tai Tuivasa will headline the second UFC event of his career this weekend. The card itself is going to be historical, as it will be the first big-scale MMA event in France after the legalization of MMA in the country. Tai Tuivasa will face home town hero Ciryl Gane in the headlining spot.

Ahead of the heavyweight clash, Tai appeared on Ariel Helwani’s ‘The MMA Hour‘ and provided an important update regarding his weight. Although the heavyweight limit in the UFC is 265lbs, very few fighters in the division come close to the limit with a few exceptions like Francis Ngannou and Derrick Lewis. But it seems like Tuivasa will weigh around 260lbs too during the weigh-ins.

During the interview, Tuivasa revealed that he currently weighs 273lbs. The fight is on September 3rd and Tuivasa does have enough time to come down to the 265lbs limit. But, it will be interesting to if coming in heavy for the fight is a conscious choice from the Aussie or not.

Will Tai Tuivasa’s weight play a role in his fight against Ciryl Gane at UFC Paris?

Tai Tuivasa is a dynamic striker who has massive power in his hands. Although the notion that all heavyweights hit hard is true, Tuivasa’s power is exceptional. He knocked out Derrick Lewis in his last fight at UFC 271 and lived up to his nickname of ‘Bam Bam.’

He is currently on a 5-fight win streak and is ranked 3rd in the division. In his last 3 fights, Tai weighed in at 263lbs, 264lbs and 265lbs for his fights at UFC 264, UFC 269 and UFC 271 respectively. But one thing that is common in all of those events is Tai’s method of victory. The 29-year-old has finished all of those bouts inside only 2 rounds. So it proves that coming in heavy helps Tuivasa’s power.

However, it also has its significant disadvantages as well. Gane is perhaps the most agile fighter in the division and moves like a middleweight. Ciryl is also an excellent striker who is highly rated for his striking defence. In order to beat him, Tuivasa’s mobility will have to be really high. The Aussie is not exactly high on wrestling, so he will have to put an insane amount of pressure on Tuivasa.

However, if he comes in over 260lbs, it will be hard for him to do so. On top of that, it will be a 5 round affair. So cardio will definitely play a big role in the contest.