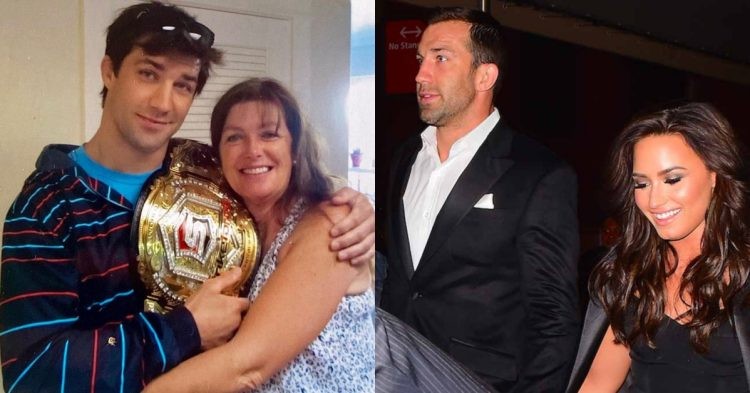 He defended the belt against Keith Jardine and Tim Kennedy before fighting Vetor Belfort on his UFC debut. Despite a loss to Belfort in the first fight, Luke went on a 5 fight win streak which saw him beat Michael Bisping and Lyoto Machida. He also beat Chris Weidman at UFC 194 to capture the middleweight belt. However, his career has taken a turn for worse since then.

He lost the belt to Bisping in the rematch at UFC 199. The loss was mostly due to his over-confidence and arrogance. He was also knocked out by Yoel Romero and Jan Blachowicz. Despite the losses, Rockhold is still considered an elite fighter in his day, who is capable of beating anybody under the right circumstances.

Luke Rockhold’s upbringing and his family

Luke Rockhold was born on October 17th of 1984. He grew up in Santa Cruz, California along with his two brothers Matt and Nate Rockhold. Luke had athleticism in his blood as his father Steve Rockhold was a basketball player in the European circuits. Luke’s older brother Matt is also involved in sports as he is a professional surfer. Luke’s mother Diana was a sports fan as well and she loved playing Tennis.

Luke often posts old pictures of his parents on his various social media accounts. Although Luke’s father has passed away, Luke wished his mother a happy Mother’s day on his Instagram account in 2020 and posted pictures from his childhood. It appears that Luke is very fond of his family as he can often be seen celebrating various holidays with his siblings and friends.

How did Luke Rockhold get his start in MMA?

Rockhold was first introduced to martial arts at the age of 6 when he took up Judo. He later got involved in wrestling in his childhood. Luke revealed that his parents pushed him to become involved with sports. Although he tried to pursue collegiate wrestling, Rockhold later got into Jui-Jitsu and became a part of the American Kickboxing Academy (AKA) in 2006.

During an interview in 2010, Luke revealed why he joined AKA in the first place. He always had a dream of being an MMA fighter and he could not refuse the invitation to train at the gym.

“I was winning some pretty big tournaments and was looking to get into mixed martial arts. It was always a dream of mine. I had heard about AKA from some friends of mine who said that the pro fighters were starting to make decent money and get some exposure on television.

“I was invited to come down and train, so I went down there and fell in love with it. I went to the store and bought a $2 mouth guard and some other gear and off I went.”

Who is Luke Rockhold dating currently?

Luke Rockhold has an illustrious dating history. Although he may come off as arrogant to some fight fans, it is undeniable that he is one of the best-looking fighters to ever compete in the UFC. He even took part in the New York Fashion Week in 2016. Hence, he has dated some of the most beautiful women in the industry.

Amongst his past flames, the most notable one was his affair with famous pop singer, Demi Lovato. They got together in 2016 and attended UFC 205 as a couple. However, the relationship did not last very long as the pair spilt up in 2017. Rockhold also appeared on ‘The Millionaire Matchmaker’ in 2015.

In 2015, He was also pictured with another megastar, Taylor Swift. But in 2022, there is no concrete information regarding who he is dating. He is either single or has decided to keep the identity of his partner a secret.