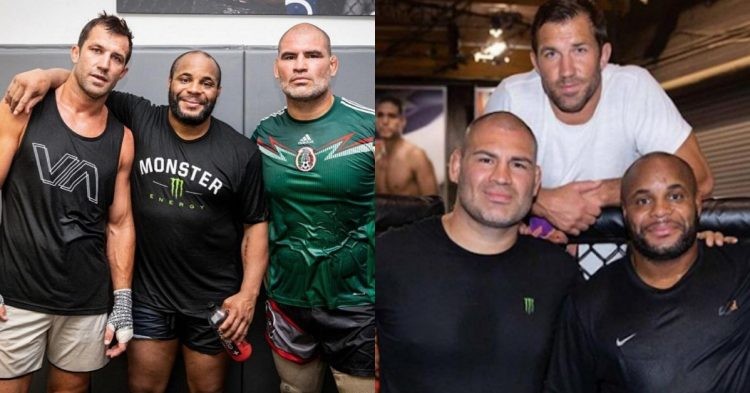 Friendships and feuds in MMA are not something that is everlasting. Once best friends can become rivals overnight. While two sworn enemies can slowly turn into friends. Jorge Masvidal and Colby Covington are the best examples of friends turned nemesis. However, one friendship that has stood the test of time is between Luke Rockhold, Daniel Cormier and Cain Velasquez.

All three men held the UFC title at one point in their career, while Daniel Cormier was one of the few men to hold two UFC belts simultaneously. Cain Velasquez was the very first one of the American Kickboxing Academy (AKA) trio to hold a UFC title. He knocked out Brock Lesnar to win the belt at UFC 121.

Daniel Cormier was the second one to grab the UFC title as he defeated Anthony Johnson at UFC 187 in 2015. Later that year, Luke Rockhold defeated Chris Weidman to become the middleweight champion at UFC 194. It makes them one of the most group of friends in UFC history. While Luke Rockhold will fight Paulo Costa at UFC 278, the rest of the two are retired from the sport.

Luke Rockhold joined AKA in 2006 while Daniel Cormier came into the gym in 2009. Both of them competed in Strikeforce around the same time. At the time, DC used to compete in the heavyweight division. He came into Strikeforce in 2011 and Luke, on the other hand, started his stint at Strikeforce in 2009.

Rockhold won the promotional belt in 2011 and DC won the heavyweight Grand Prix in 2012. They both joined the UFC together after the company absorbed Strikeforce. They clearly had a long journey together and made many great memories. In an interview with Fox Sports in 2015, Rockhold revealed what their struggling days looked like.

During the interview, Rockhold stated that he and DC lived together at AKA’s boxing coach Bob Cook’s place. They spent their time playing video games after training. While DC helped Luke with the wrestling inputs, Luke made sure that he improved Cormier’s Jui-Jitsu and striking. It certainly helped as both of them reached incredible heights in their career.

Cain Velasquez is currently held up in jail after he was detained for an incident which took place in February of 2022. Reports suggested that Cain allegedly chased after Harry Goulrate and shot him on February 28th. He was charged with the counts of attempted murder and various other gun-related charges.

Cain’s alleged actions took place after the reported victim allegedly molested Velasquez’s son over ‘100 times.’ The former UFC heavyweight champ’s alleged action was an act of rage as he wanted to avenge his 4-year-old son.

But his actions were illegal and Cain is currently going through a trial for the case. From UFC president Dana White to Khabib Nurmagomedov, everybody joined in and raised their voice to fuel the Free Cain movement. Now, Luke Rockhold has also joined in as he recently shared his thoughts on the matter.

“Being up here, in fight week, can’t help but think of my brother Cain and the injustice of the California Justice system. How they have not seen paedophiles as violent criminals and not convicting them; charging but not convicting and setting these men free to, women free to terrorize and ruin lives. Innocent lives that have promise and hope and putting innocent men in jail for just trying to protect their family, their kids.”

Luke certainly misses his teammate. Cain also joined AKA in 2006; around the same time when Luke came into the gym. So it is certainly painful for him to see one of his best friends in jail for apparently trying to protect his family and children.