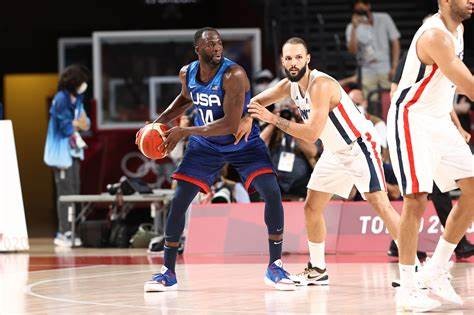 Team USA have one of the strongest rosters when seen on paper. Every player is carefully handpicked from the NBA. They have the leadership of Kevin Durant, the IQ of Damian Lillard and the young power in Jayson Tatum and Devin Booker. The roster also has two recently crowned NBA Champions, Khris Middleton and Jrue Holiday. In spite of having a star-studded roster, Team USA has suffered in the Olympics this year.  After two losses in the exhibition games, USA has now officially lost it’s first Olympics game since 2004.

Team USA gets disappointing loss handed to them by France

The France basketball team pulled off a stunner and gave USA a disappointing loss in the opening game of the Tokyo Olympics. Team France beat Team USA 83-76.

The game began with USA actually having a 7 point lead before entering the final four minutes of the game. However, they went on to choke and France put up the next 14 points with ease. France put up a 16-2 run to close out the game. The only player who actually looked in great form was Jrue Holiday who put up 18 points.

For the French, Evan Fournier as the star. He lead the France basketball team from the front and put up 28 points. The French man spoke about how USA might be filled with great individual stars but as a team they tend to fall apart. Fournier was probably the only star on the court. The French man put up more points than Kevin Durant, Devin Booker and Damian Lillard combined

They are better individually, but they can be beaten as a team.

What went wrong for team USA was the fact that they missed shots in the clutch moments. USA missed the last nine attempted shots. Five of those shots were put up in a span of just 21 seconds. The team was also seen missing wide-open layups. Long Story short,  USA needed to hold its ground and keep the lead instead of choking in the last minute.