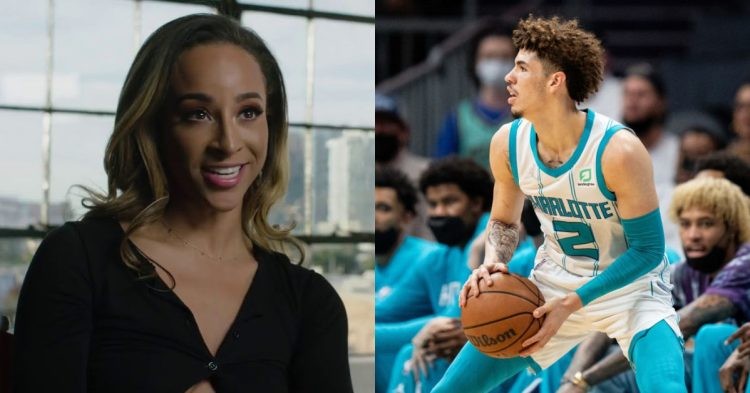 Teanna Trump in an interview and LaMelo Ball on the court (Credit: Twitter)

There have been rumors that Teanna Trump dated NBA star LaMelo Ball back in 2021, and more than a year later, fans are still not having it. Teanna Trump has become a pretty controversial figure in the NBA world owing to her multiple accusations against NBA players. In the past, she has accused a former Indiana Pacers player of being the one who got her into the adult film industry.

LaMelo is only 21 years old. On the other hand, Teanna Trump is 27 years old. This makes the relationship quite controversial in itself. We should wonder what basketball fans had to say on the subject. They made their opinions clear through social media mediums like Twitter.

As we already mentioned, the youngest ball brother is only 21 years old. Be that as it may, he was first spotted with the actress back in late 2020 and early 2021, when he was apparently only 19 years old. Many NBA fans made jokes that sounded quite inappropriate. After all, not many men would want to be in a relationship with a woman from the adult film industry.

LaMelo Ball spotted with Teanna Trump? I don’t blame him one bit 🤣🤣🤣👀👀 pic.twitter.com/7xg359D3up

LaMelo Ball won the rookie of the year award in 2021. Therefore, fans mused that this was the perfect way to spend the NBA offseason. Some even said that they would do the same thing he did if put in a similar situation, “Lamelo and Teanna Trump…I wouldn’t date her but shid if I was 19 and balling, Id wanna see what that be like too.”

LaMelo Ball knocking down Teanna Trump is the perfect kind of off-season the ROY deserves. pic.twitter.com/REGa83eXKC

Fans even joked that Teanna’s high-profile presence might be able to help the Charlotte Hornets franchise, “If LaMelo Ball is really with Teanna Trump, this man has actually turn the Hornets into a destination.“. People also decided to point out that LaMelo was also with a model named Ana Montana at the time. Therefore, they also showered him with comical praise for this achievement.

If LaMelo ball is really with Teanna Trump, this man has actually turn the Hornets into a destination 😂

We really can’t hate too much on the young man for trying to live life on his own terms. After all, he is not a child. Instead, a rare talent and is now a professional athlete.