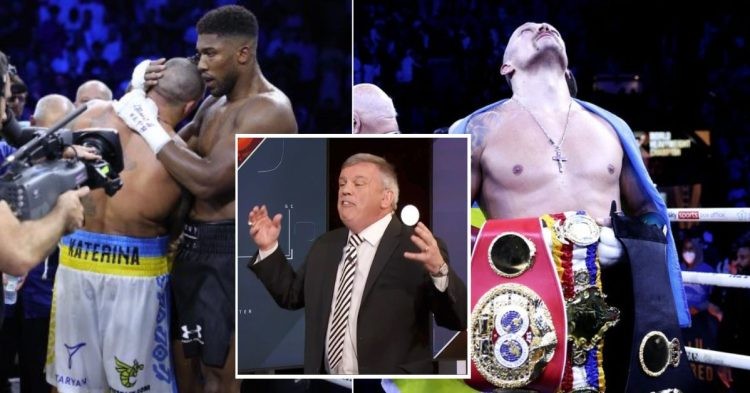 Teddy Atlas did not hold back as he slammed Anthony Joshua for his remarks following the split decision loss against Oleksandr Usyk in the rematch for the unified heavyweight titles in Jeddah, Saudi Arabia. However, he also added that Joshua meant well while reminding him that he lost at the same time.

Usyk and Joshua engaged in a battle for the ages in the rematch for the heavyweight titles. After everything was said and done, it was Usyk who emerged on top to retain his heavyweight gold. The pound-for-pound best also showed just how brilliant he is, seemingly putting the debate of modern heavyweight GOAT to an end.

Anthony Joshua, who suffered his second straight loss and third of his professional career have a lot to ponder about. While only time will tell what he does next, it was quite weird for Joshua to cut a “promo” following the loss.

Anthony Joshua took to the microphone immediately after the fight and showered praise on Oleksandr Usyk for his skillset. However, it wasn’t without throwing some praise on himself as he went on to explain why Oleksandr Usyk is a great heavyweight boxer in his own right.

Could do without the F bombs, but in end Joshua means well, showing his humanity, but no matter what old fighters he evokes, he lost. #UsykJoshua2

Anthony Joshua even went on to assert that he is not a 12-round fighter and listed several names who have lost and are still stars in the eyes of boxing fans. The entire segment did not sit too well with a lot of boxing fans, including Teddy Atlas, who did not hold back in his recent tweet.

Give Eddie Hearn credit even though he’s Joshua’s man he was very honest in interview saying Usyk was better man. Joshua is so used to being treated as the Star that he used 1 good round tonight to act like he won. #UsykJoshua2

Many fans opined the entire segment took the shine away from Usyk and that the Champion should have had the “dibs” on the microphone.  On the other hand, Atlas’ criticism did not stop here as he slammed Anthony Joshua for acting like he won the fight with just a single good round to his name.

Just because he had a big round tonight, which he didn’t in 1st fight, gave Joshua opportunity to say he won but he should know truth. And hopefully those great fans from across the pond also know truth. #UsykJoshua2

Anthony Joshua did have a dominant round in the ninth, however, Usyk’s comeback in the championship rounds and the rounds preceding the ninth were all in the favor of the Ukrainian fighter. Certainly, Joshua showed a great fight, making great use of the body shots and showing huge improvement from the first fight. Be that as it may, it wasn’t enough to stop Usyk, who proved to be too much for Anthony Joshua yet again.