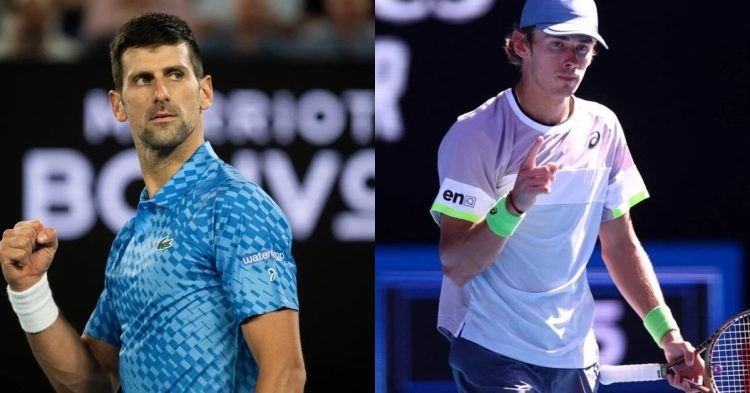 Novak Djokovic played at his level-best in the fourth round of the Australian Open nursing a hamstring injury he said was affecting his gameplay for the past few matches.

Storming into the quarter-final round at the Australian Open, Novak defeated Australian player Alex de Minaur without facing much resistance, ending the Aussie’s challenge with a score of 6-2, 6-1, 6-2.

In the past couple of days, Novak has been talking about a hamstring injury that he claims is taking a toll on him with every match he’s moving forward with and is playing at a match-by-match proposition to continue his run at the championship.

These claims however were slammed by Alex de Minaur, who after losing the match to the Serb was under the impression that Djokovic’s assertion and stance on the condition of his hamstring is a hoax.

According to Alex, Novak’s hamstring looked “good” as he played the fourth round against him commenting “Playing him, I thought he was moving pretty well, so…I don’t know.”

Minaur when asked about how he prepared for the match against Novak with the knowledge of his hamstring issue in place further added saying, “Look, I don’t know. I think everyone’s kind of seeing what’s been happening over the couple of weeks. It’s the only thing everyone’s been talking about.”

“I think everyone’s kind of seeing what’s been happening over the couple of weeks. It’s the only thing everyone’s been talking about. Either I’m not a good enough tennis player to expose that, or it looked good to me”

While fans have tagged Alex de Minaur as a sore loser, Djokovic, post-match gave the tennis community an insight into the current condition and said that he did not face any hamstring issues while competing with Minaur.

“I didn’t feel anything today. Today was great. Tonight I didn’t feel any pain. I moved as well as I have the whole tournament. It means we are progressing in the right direction,” added Djokovic post-match at the Australian Open.

Novak has now advanced to the quarter-final round and where he awaits his match against Andrey Rublev which is scheduled to take place on Wednesday at Melbourne Park.

Serbian tennis star Novak Djokovic isn’t surrounded by allegations that accuse him of exaggerating his injuries for the first time in his ATP career.

Earlier at the Australian Open 2021, Novak often spoke about an abdominal tear hindering his performance, but surfed through the championship to bag the Slam defeating Russian tennis professional Daniil Medvedev in the finals.

More previously, in a match against Tommy Robredo at the 2008 US Open, Djokovic took two medical timeouts during the match and nevertheless, cruised through the gruesome five-setter to which Andy Roddick later mocked the Serb’s injuries.