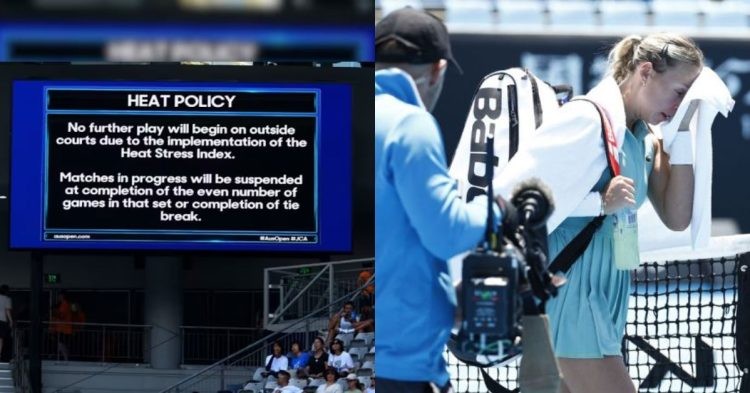 Heat policy message is displayed on the big screen as play is suspended on the outside courts due to high temperatures (Credit: CNN)

The Australian Open is the premier event of the Grand Slam of tennis and one of the most eagerly anticipated events on the sporting calendar. Unfortunately, the second day of play at this year’s tournament was suspended due to extreme heat.

The AO Heat Stress Scale has reached 5 and play will be suspended on the outside courts. This means play continues until the end of an even number of games or the completion of a tie break. No new matches will be called to court. Play on outdoor practice courts is also suspended.

This index takes into account the air temperature, humidity, wind speed, and solar radiation to measure the potential heat stress on the players, staff, and spectators.

When the WBGT index reaches a certain level, the tournament organizers are required to suspend play and call for cooling measures. The WBGT index is calculated by recording the temperature and humidity in the shade and the solar radiation in the sun while considering the wind speed.

The cooling measures include providing shade and misters to the players, staff, and spectators, and providing extra breaks between sets.

What are the advisory steps when implementing the extreme heat policy?

The extreme heat policy also requires that all players, staff, and spectators take steps to reduce their risk of heat stress. This includes wearing light-colored, loose-fitting clothing, staying in the shade or air-conditioned areas, drinking plenty of water, and limiting physical activity during the hottest parts of the day.

The Australian Open organizers take this policy seriously, and players, staff, and spectators alike are expected to adhere to the rules for their safety. The organizers have provided multiple cooling zones and have taken steps to ensure that the extreme heat policy is followed.

The roofs will remain closed on RLA, MCA and JCA for the remainder of the matches currently in play. There will be no play on outside courts before 5pm. The Referee will continue to review conditions AO-Heat Stress Scale to determine when play can be resumed on outside courts.

The Grand Slam held in Melbourne is one of the most prestigious events on the tennis calendar, and the tournament organizers are taking the necessary precautions to ensure that everyone involved stays safe and healthy in the intense heat.

With the extreme heat policy in place, the organizers are ensuring that the tournament can continue without any risk to the players, staff, and spectators.