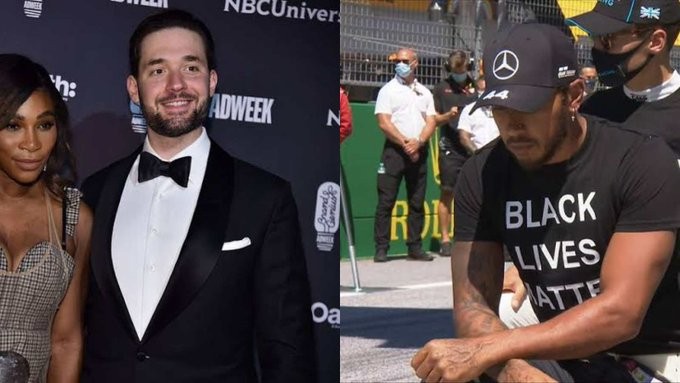 Serena Williams is a 23 time Grand Slam champion from USA. She holds the record for the most Grand Slam titles in singles, doubles and mixed doubles among all active players. Serena is one of the best players in the world. Her records speaks for herself.

Serena Williams is married to Alexis Ohanian who is the founder of Reddit. They both had a daughter, Olympia. She is a huge admirer of Formula 1. She and Alexis are a massive supporter of Lewis Hamilton.

For many years both Hamilton and Williams have reciprocated their respect and admiration for each other.

Alexis Ohanian has been a Lewis Hamilton supporter for quite a few years now. Hamilton was in Abu Dhabi for the Grand Prix, where he lost the final to Max Verstappen. This was a chance for Lewis to go past German legend, Michael Schumacher.

Ohanian tweeted his anger out over Lewis Hamilton’s defeat in Abu Dhabi. Max Verstappen won his first world title by overtaking Lewis Hamilton on the last lap of the last championship race. Alexis tweeted: “This is a bulls**t.” and “Congratulations to the safety car!”

THIS IS BULLSHIT @F1

Alexis Ohanian showed his respect for Lewis Hamilton when the Brit decided to kneel during the Austrian Grand Prix in 2020. Even some of the other drivers also joined Lewis to convey the message that “Black Lives Matter”.

“Ultimately nobody should be forced into a scenario where they have to kneel. I never requested or demanded anybody to take the knee. It was brought up by Formula One and by the GPDA (Grand Prix Drivers’ Association). When we did the drivers’ briefing Seb (Vettel) and (Romain) Grosjean both brought it up and asked the drivers,” Hamilton had told the British reporters.

Lewis Hamilton also said, “I am really grateful for those who did kneel along with me. I think it’s still a really powerful message but ultimately whether you do or do not kneel, that’s not going to change the world. It’s a much, much bigger issue,”.

Lewis Hamilton to Support Serena Williams In Her Masterclass

Lewis Hamilton will participate in the masterclasses created by Serena for her association. “When I was young I tried to mix with others. Once I learned to accept my differences, I never wanted to be anyone else. During the masterclass, I will teach you how to conquer your personality and use it to reach yours. goals,” said Lewis.

Serena Williams was not seen on the court since the day of her injury in the match of the first round of the Wimbledon tournament that led her to abdicate towards her goal. Serena is ready both mentally and physically to come back on the court.

Williams has withdrawn her participation from the Australia Open 2022, but her fans are waiting eagerly for her come back.