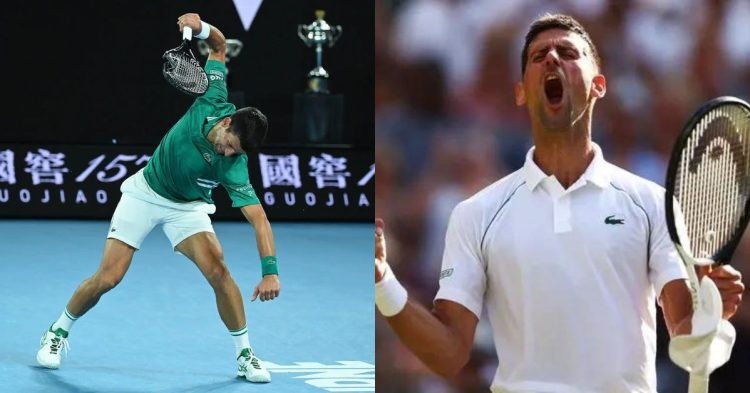 Novak Djokovic is undoubtedly one of the greatest players in the history of tennis. His 21 grand slams are a testimony of his greatness. However, there is one aspect that is deeply confusing about the Serbian star. Despite being a legend in every sense, he is not the fondest personality in the tennis world.

Even after overtaking Federer in the grand slam race, he is still kept behind the Swiss legend by most tennis fans. Djokovic doesn’t shy away from pumping his fist or beating his chest after every tough rally. Many fans find his mannerisms annoying and too emotional.

On the contrary, tennis’ most loved star Roger Federer is the polar opposite. He doesn’t emote much on the court but still doesn’t come across as boring. However, it is also fair to say that fans get to see the best side of Djokovic when the crowd is rooting against him.

In a match against his rivals like Federer and Nadal, the crowd inside the stadium are usually hoping for his opponent to win. That is when Djokovic gives his best to piss off an entire stadium by beating his arch-rivals. Being the outlawed tennis legend has helped him in winning 21 grand slams.

How fans’ hate for Novak Djokovic is similar to that of Nick Kyrgios?

If you are even a remote tennis follower, you know the name Nick Kyrgios. It is not because he has won many grand slams as he has not won any till now. It is because he is known for his immature behavior that drives some fans crazy and keeps the other half hooked to their screens. He has a love-hate relationship with tennis fans as they swing both ways depending on the situation.

Don’t really follow Tennis, but if you’re more hated than Novak Djokovic then you must be really, really hated.

If you look at Djokovic’s relationship with tennis fans across the globe, it is quite similar to Kyrgios. When it comes to other matches where he is the favorite, the crowd is with him supporting him like a rock. However, as soon as he faces Nadal or Federer, fans shift their support to the other camp. It has been some kind of an open mystery as to why Djokovic is hated so much more than his rivals.

His antics against a calmer Federer or Nadal automatically project him as the brash one and it clearly works for him. Djokovic’s on-court behavior has improved by many folds in the past few years and is nowhere close to the chaos created by Kyrgios.

As hated as he is for his style of play, he is undoubtedly one of the greats. The definition of mentality monster. Never fails to put up a fight. pic.twitter.com/mpuCMAdudp

However, the image he created probably 10 years back has stuck with him. The reality is that he is always kept at number three in the Big Three club. However, he is most likely to overtake both of them at the end of his career.