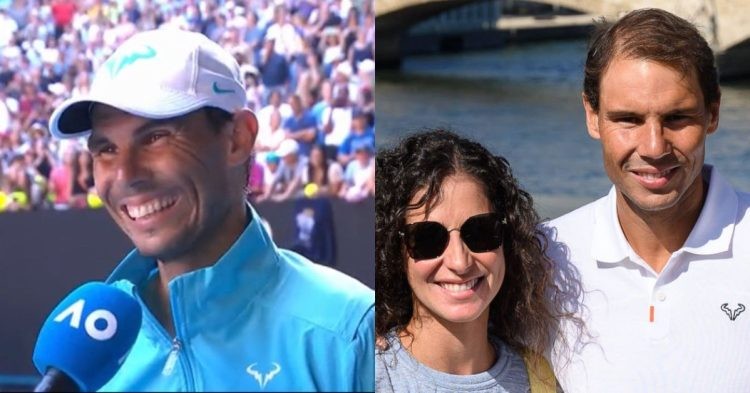 It’s been nearly 22 years since Rafael Nadal turned pro. From the onset of that point in his life, he has achieved what others could only fathom and become many things amongst which most recently has set foot on his journey as a father!

The Spaniard in October 2022 welcomed his first child with his wife Maria Perello, a baby boy who he named after himself, Rafael Nadal Perello.

In an on-court interview at the ongoing Australian Open, Nadal was asked about his feelings and insight on becoming a dad to which he elatedly replied “One of the most beautiful things in this life without a doubt.”

“So enjoying this new moment, having fun, and super happy. Grateful to have the chance to have them here with me in Australia. That helps a lot,” added Nadal.

“One of the most beautiful things in this life.” 🥰@RafaelNadal on becoming a dad.

There is absolutely no room for doubts when it comes to Nadal enjoying his fatherhood journey as he offered a priceless reaction to the questions posed to him after his first-round victory at the Australian Open 2023.

22-time Grand Slam champion Nadal moved to the second round of the Australian Open after overcoming Jack Draper’s challenge in the first round, concluding the match at a final score of 7-5, 2-6, 6-4, 6-1. However, he had to bow out of the competition due to a serious injury leaving fans and his wife in tears.

Rafael Nadal who became a father for the first time in October last year played his first Grand Slam since. Luckily, he had his wife Maria and newborn baby boy Rafael in Melbourne with him.

The Spaniard on Monday admitted that he was not sure about his family being able to cope for an entire month while he performs at the Australian Open but says he was grateful for them joining him on his journey.

After winning the first round in Melbourne, Nadal commented saying that being a father has not hindered his competitive spirit and motivation.

Rafa is known to keep his personal life behind the curtains and not reveal many intimate details about it. He prefers keeping a lid on his family in the public eye and not disclosing much information relating to his household status.

36-year-old Rafael Nadal is currently ranked world No. 2 and was the defending champion of the Australian Open 2023 before he suffered another major injury that made him bow out.