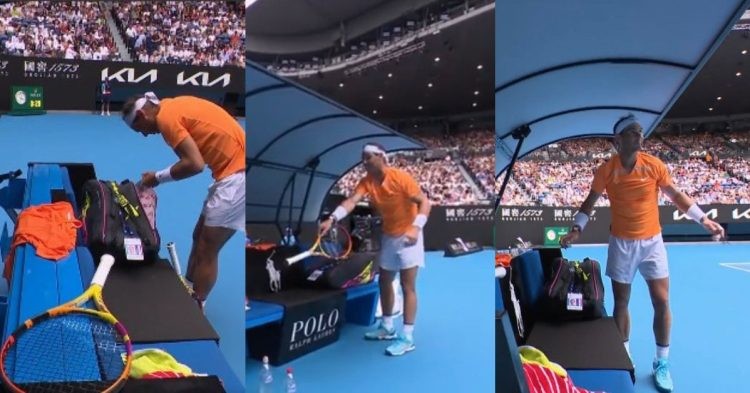 Rafael Nadal in a recent match was utterly amused when a ballboy mistakenly left with his racquet eventually leaving him without his playing racquet amidst an ongoing match.

Hilarious moments were witnessed on the court of Rod Laver Arena when Nadal pleaded to the chair umpire for needing his favorite racquet back to resume playing and said “The ballboy took my racquet.”

Both spectators and commentators had a good laugh over the ballboy’s mistake who accidentally took Nadal’s racquet away for stringing as he could be seen reporting the incident to the chair umpire whilst he was in the middle of playing a match.

"The ballboy took my racquet" 😂

Rafael Nadal went against Jack Draper in the first round at the Rod Laver Arena of the Australian Open and ultimately won the match in four sets with the final score of 7-5, 2-6, 6-4, 6-1, booking his berth to the second round of the Grand Slam.

21-year-old Draper is a British tennis professional with a career-high ATP rank of world No. 40 and was sent packing by the Spaniard Rafa in the beginning round of the Australian Open.

Nadal, who is seed No. 1 at the Australian Open now stands to face Mackenzie McDonald for his second-round match which is scheduled for 18th January.

Rafael Nadal has returned to the 2023 tour after an injury-plagued 2022 season which had him dealing with issues of an abdominal tear and a foot injury.

The Spaniard is seeded at No. 1 at the ongoing Australian Open and is bound to face a few challenges along the way owing to the difficult draw he is drafted under.

Despite being the defending champion of the Australian Open title, the 36-year-old could have a face-off against Russia’s Daniil Medvedev in a potential quarter-final which could be problematic for Rafa as the world No. 7 Russian known to the world as a formidable opponent to go against.

Nadal isn’t expected to have any cakewalks on his way up the championship and is also projected to have a potential final match against Novak Djokovic, who remains heavily favored in the Australian crowd and could decrease Rafa’s chances for lifting the Australian Slam again this year.