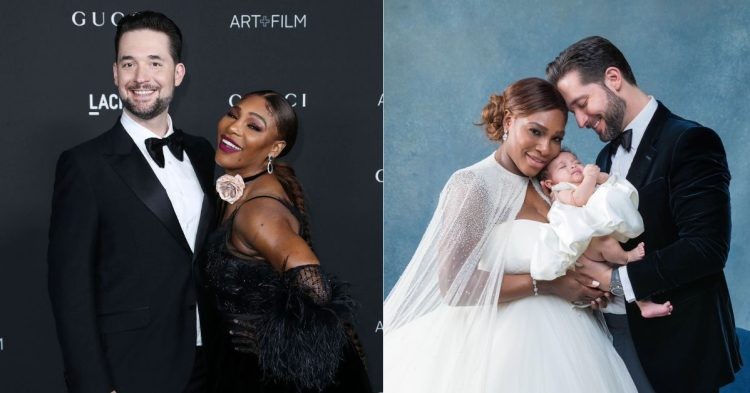 Serena Williams with her husband, Alexis Ohanian. (Credit: US Weekly)

In Rome, in May of 2015, the tennis superstar and the co-founder of Reddit met for the first time over breakfast. They would eventually fall in love because they happened to be sitting next to each other. Williams made the first move by inviting Ohanian to sit with her and her friends at breakfast. Soon after, Williams extended an invitation to watch Ohanian play at the 2015 French Open.

The internet entrepreneur and the athlete went on their first date together, touring Paris before the match. The following few months were filled with support, with Ohanian cheering her on at games from the stands.

Before meeting Williams, Ohanian had never even heard of tennis. He admitted to Vanity Fair that he “never watched a match on television or in real life.”

“I had no respect for tennis,” he added. The couple got engaged in 2016, had their first child together in 2017, and tied the knot later that same year; ever since then, they have shared smiles, traveled the world, and graced red carpets.

Williams and Ohanian met by accident when they sat next to each other at the Cavalieri Hotel in Rome for breakfast. “I’m like, ‘Huh!’ when this big guy comes and sits at the table next to us. Why is he sitting here with all these tables?” the tennis star profiled on the cover of Vanity Fair in June 2017. Williams invited Ohanian to watch her play in the French Open.

The second Grand Slam event of the month, following her victory at the 2015 Australian Open. The entrepreneur flew over to meet her, initially skeptical. She revealed to Vanity Fair that she and Williams traveled together throughout Paris before the beginning of the tournament, which Williams would ultimately win.

Ohanian and Drake were both in the stands at the 2015 U.S. Open to support Williams. He wrote, “Come at the queen, you best not miss.” On a picture of the athlete playing on the court. US Open. Despite Ohanian’s social media posts throughout 2016, the tech mogul only appeared on Williams’ Instagram account later that fall, when he posed with her friends for a group photo. Williams referred to Ohanian as a “nerd” in the caption.

His tactical proposal to Williams, which required strategic coordination for several months, was well-thought-out by Ohanian.  What a surprise! He carried it out where they first met: the Hotel Cavalieri. Williams posted a poem on, you guessed it, Reddit to announce her engagement. She penned: “I returned home. A tad late. I had a bag packed by someone else. A carriage also awaited. Destination: Rome.“

“We first met by accident at the same table. But voluntarily. kneeling, He used four words. And I agreed.” Williams first displayed her engagement ring when she traveled to Australia for the Australian Open in January 2017. To promote the band once more, she turned to Reddit.

She captioned the photos of herself wearing Nike sneakers and a dressed-up Ohanian, writing, “Engagement shoe game” Serena found out she was pregnant just a month after they got engaged. Alexis Olympia Ohanian, the couple’s daughter, was born on September 1, 2017. Serena and Alexis wed in New Orleans two months after giving birth to their daughter, however, Williams nearly died giving birth to her daughter.

The news that the American tennis player is 20 weeks pregnant indicates that she won her record-breaking 23rd and most recent Grand Slam singles title at the Australian Open when she was 35 years old, eight weeks into her pregnancy. Serena has been put to the test she never could have imagined during her first few months as a mother.

She says, “Man, sometimes I get down and feel like I can’t do this.” I frequently exhibit the same negative attitude on the court. That’s just me. Nobody talks about the low points—the pressure you feel and the incredible disappointment you think each time the baby cries. I’ve fallen to the ground numerous times. Or I might feel resentful about the crying, sad about it, and guilty, asking myself?”

“Why do I feel so sad when I have a beautiful baby?” The feelings are crazy. For Serena Williams, strength is more than just a physical trait; It serves as a guide. And 6 years later the rest is history!