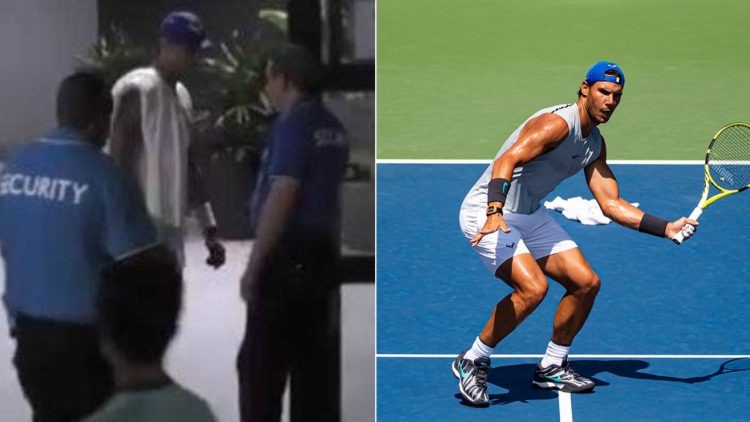 Rafael Nadal is finally back on the tennis court; this time, he is preparing hard for the upcoming Paris Masters. Rafa was previously in action during the Lavers Cup wherein he paired up with Roger Federer for the Swiss Maestro’s final match. After the game, Rafael Nadal withdrew from the tournament because he wanted to give time to his family.

During this period Rafa and his wife welcomed their first kid. Nadal who has 22 Grand Slam titles to his name can be considered one of the most recognizable faces not only in tennis but across all sports.

However, during certain rare instances, people still fail to recognize him. In a recent throwback video posted by a fan, a security guard at the Paris Masters venue way back in 2017 failed to recognize Rafael.

Throwback to when a security guard could not recognize Rafael Nadal at the 2017 Paris Masters 😄 pic.twitter.com/8lB41jEZkv

He stopped him and requested him to produce a pass to which Nadal responded by saying that he is not currently carrying it. After this, the guard even went ahead to ask who the former World No.1 was to which he responded Rafael Nadal before he got inside the venue.

The most astonishing part is that this incident occurred in Paris, a place where Rafa has won a record 14 French Open titles.

Rafael Nadal had a brilliant 2022 season wherein he won the Australian and the French Open. However, his performances have been a bit disappointing after he suffered an abdominal tear during the Wimbledon. His fans would surely hope that he regains his form before the Australian Open starts at the beginning of 2023.

It is surely surprising to know that Rafa is yet to win a Paris Master title. Even though his career has spanned more than two decades the Paris Masters title has been successful in eluding the Rolland Garros winner. His best results in the tournament have been in 2008, 2012, 2019, and 2020 wherein he reached the semifinals.

Finally, after a gap of two years, Nadal is ready to give it yet another go and finally clinch the elusive title. After the Paris Masters, Rafa will head to Turin for the ATP Finals, another title that is missing from his trophy cabinet. Rafael will surely be counting to end the 2022 season on a high note in order to be best prepared for the 2023 season which would start with the Australian Open, which was won by Rafael in 2022.