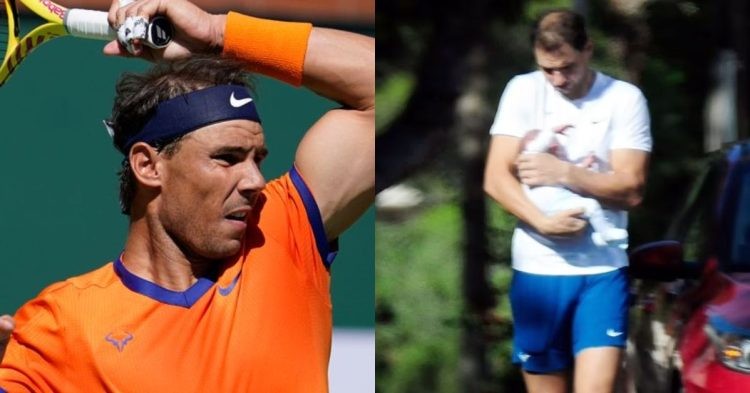 The year 2022 turned out to be packed with moments of both excruciating pain and ecstasy for the former world No. 1 Rafael Nadal.

Nadal, who keeps his personal life under the rug on most occasions welcomed his first child who he ironically named after himself, Rafael Nadal Perelló on October 2022 in Palma de Mallorca and took to Twitter to thank everyone for their wishes and update his fans with news for the same.

Amidst the birth of Nadal’s son, fans estimated that the Spanish champion would name his son after his father Sebastian due to a long-run tradition in Mallorca which suggests a newborn baby be named after his grandparents.

Rafael is a fairly common name used in Spain and comes from Hebrew origin meaning “God has healed.” Nadal did not however disclose the reason why he finalized this name for his son.

Rafa’s joyous moments came long after the Spaniard went through troublesome and painful injuries in the 2022 season. The 22-time Grand Slam champion underwent a series of injuries, namely a foot injury and an abdominal tear which hindered both his appearance and performance for the 2022 tour.

The news came two weeks after Rafael Nadal flew back from London where he teamed up with longtime opponent turned friend Roger Federer who played his career’s final match on the opening night of the prestigious Laver Cup.

Both Roger and Nadal represented Team Europe in the Laver Cup and were seen bursting into tears after the ‘Swiss Maestro’ expressed his gratefulness to the players in the tennis circuit in his on-court farewell speech at the Cup.

Rafael’s grandfather is Sebastián Nadal Homar. His origin lies in a town on the island of Mallorca, Spain where he is the owner of an insurance, glass, and window company, Vidres Mallorca. He is a well-known and successful businessman who owns a restaurant called Sa Punta.

Sebastian Nadal in the early times of Nadal’s training days bore all his training expenses with the best use of resources available to him at hand.

When Rafael was born in 2022, there were speculations that he is to be named after his grandfather Sebastian but the mystery ran its course with time and he was eventually named after Nadal himself.

Who is the mother of the 22-time Grand Slam champion Rafael Nadal’s kid?

Maria Francisca Perello is the mother to Rafa Nadal Perelló and the wife of one of the greatest tennis players of all time, Nadal.

The couple who got married in October 2019 after dating for an extensive period of 14 years nevertheless remained quiet and kept things low profile concerning their dating life.

During a press conference in July 2022, Rafael confirmed to the press that he and his wife Maria are expecting their first child and also answered why he preferred keeping a curtain on his personal life quoting, “I’m already exposed enough in my professional life,” he said. “My loved ones and I like to live with a low profile.”

Like Nadal, his other half Maria hails from the same town, Mallorca, which is the largest island of Spain’s Balearic Islands. According to Maria Perello’s LinkedIn profile, she has an undergraduate degree in business management and later attended ESADE, a graduate school in Barcelona, for post-grad studies.