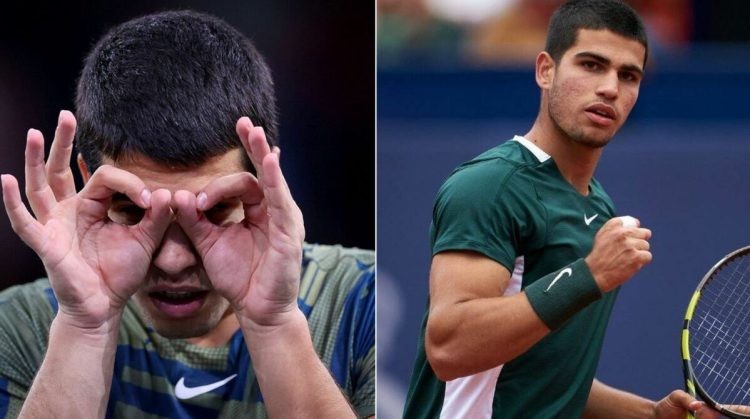 Carlos Alcaraz is currently going through a major purple patch in his career and it seems that no one is able to beat him. He won his maiden grand slam title in the US Open and also clinched the World No.1 spot on the ATP list that way.

He recently withdrew from the Paris Masters during his quarterfinal match against Holger Rune after he suffered from an injury. However, this does not take away anything from the fact that if not for the injury Carlos Alcaraz was probably the major contender for the title alongside Novak Djokovic.

Apart from the skills showcased by the young Spaniard his celebrations after winning his matches have caught the attention of his fans. A fan on Twitter asked him about a specific celebration of his. Carlos responded by saying that this celebration is related to the name that his friends have given themselves. He stated,

“It’s no secret! I have a group of friends called Team Lupas (glasses)! That’s where the celebration comes from!”

It’s no secret! 😀 I have a group of friends called Team Lupas (glasses)! That’s where the celebration comes from! 🤓 https://t.co/ZmEByMPVvc

Carlos has always appreciated the support of his friends and also highlighted the sacrifices he had to make to reach this point in his career. He once said that he could not spend a lot of time with his friends since he had to focus on tennis.

Who are Carlos Alcaraz’s Friends that wear Glasses?

We do not exactly know about all of Carlos’ friends who wear glasses, however, he said that his friend group is nicknamed Team Lupos and one of his friends, Filipe Saldanha replied to his tweet as well.

It seems that Carlos shares a good bond with his group of friends since he has dedicated an entire celebration to them. Carlos currently is out injured.

He also stated after his withdrawal from the Paris Master quarterfinals that his appearance in the Turin ATP finals would be doubtful. Carlos surely would be thinking about being match fit for the upcoming Australian Open which would be held from January 2023.

With the early exit of Rafael Nadal from the Paris Masters, Carlos will not be concerned about losing his World No.1 spot in the ATP ranking list as well. He will end the 2022 season as the best player on the planet. We can only hope that Carlos recovers from his injury as soon as possible and make an appearance for the ATP finals to be held in Turin.