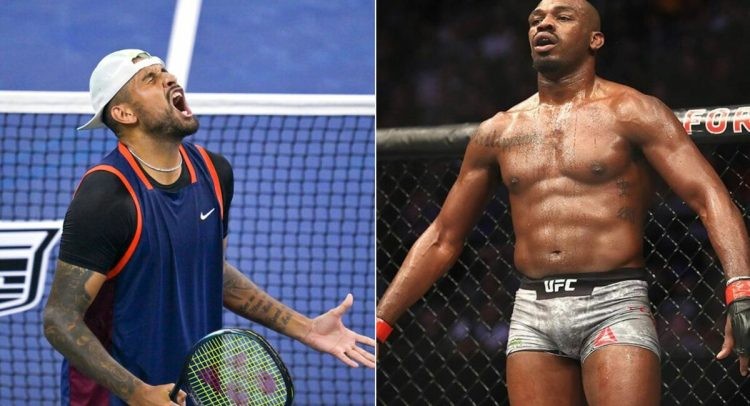 Nick Kyrgios, the self-proclaimed bad boy of tennis, posted a story about Jon Jones, the MMA fighter, on his Instagram account and even went ahead to call him legendary.

Nick is recovering from a knee injury and had to withdraw from the oncoming Paris Masters and it seems that he would be doubtful for the upcoming ATP finals as well. Jon Jones, the personality Kyrgios posted on his story is a 35-year-old mixed martial arts fighter based out of the United States.

He is currently signed to the Ultimate Fighting Championship under which he has competed in the light heavyweight division. Calling Jon Jones a person of questionable character would be an understatement.

His conduct both in and out of the octagon has been criticized. In September 2021, Jones was charged with misdemeanor battery assault and tampering with a vehicle after he was found headbutting a police car. From 2015 to 2017, Jon was involved in tons of controversies including drug abuse and domestic violence.

His driving license was also suspended in 2012 after he crashed his Bentley. Jon’s controversies had reached a boiling point and he was almost forced to quit fighting for the UFC, however, his good record in the sport helped him and he eventually got better with all his antics.

The argument put forward by a lot of tennis fans that Nick Kyrgios is of questionable character is surely debatable.

The outspoken tennis star has indulged in a lot of controversial affairs. When comparing the conduct of Nick to Jon Jones one thing which needs to be considered is that tennis and MMA are two different sports, however, we can still find a lot of similarities between the two sportspersons.

Just like Jon, Kyrgios is also charged with domestic violence against his ex-girlfriend and is currently fighting a case in court against the charge.

Nick has always been disrespectful towards the audience on the tennis court and some even claim that he has no respect towards the sport or his opponents. Nick has also accepted the fact that he has had a drug abuse problem which put his mental health in question.

The Wimbledon finalist has however calmed a bit and has distanced himself from controversies that would potentially tarnish his name. It is expected that Nick would miss the ATP finals to be held in Turin, however, he should be recovered for the Australian Open which is his home tournament.