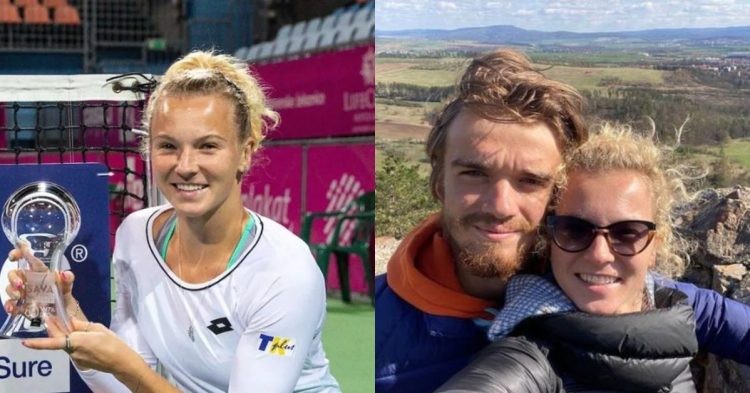 Czech tennis professional Kateřina Siniaková is a player not discussed enough when it comes to singles performances, however, Kateřina is the talk of the town when concerning her doubles record.

The 26-year-old player hails from the Czech Republic and currently ranks as world No. 1 in doubles and most recently won the 2022 US Open doubles title.

As shiny as her professional results look, her dating life isn’t any less either. The Czech player is currently dating Tomas Machac, who like Kateřina, also represents the Czech Republic.

Tomas Machac won his first singles ATP title at the Koblenz Open in February 2020 and made his maiden Grand Slam qualification at the 2020 French Open where after qualifying for the championship, he ultimately lost to Taylor Fritz in the first round of the main draw.

Machac is a budding tennis professional and is slowly coming up the reins to compete with the giants performing at the highest levels of the ATP Tour. In his 2021 Australian Open, he performed slightly better than he did in his previous Slam.

He qualified for the main draw where he defeated Mario Vilella Martínez in the first round of the championship before losing to world No. 10 Matteo Berrettini in the second round of the Australian showdown.

Many couples during the lockdown period found it difficult to cope with dating parameters like connectivity but for the Czech couple, it helped trigger the start of a loving and healthy relationship.

How did Kateřina Siniaková and Tomas Machac meet?

Kateřina Siniaková and Tomas Machac have been together for quite some time now. According to their Instagram profiles, the couple initially met in the 2020 season. They spent most of their time together at the 2020 Tokyo Olympics and later started dating during the COVID-19 quarantine at the 2021 Australian Open.

Later when they reached the stage where the sparks between them started acknowledging themselves as deep affection and love, the couple publicized their relationship in February, reportedly one month after they started dating.

The athletic couple, according to their social media posts, is in deep love with each other and shares every moment. With both living in the sports world, there is great bonding, and chemistry between them. Kateřina is four years senior to her boyfriend Machac. Both players are constantly learning, making their way into building themselves a significant and recognizable tennis career.