On his course to the record breaking 21st Grand Slam title, Rafael Nadal put on a clinical performance against Yannick Hanfmann. The German qualifier was defeated by a ruthless Nadal for a place in the third round. The score stood at 6-2 6-3 6-4.

Also Read:- Jamie Hampton Furious With Fans For Speculating Rafael Nadal To Retire; Says, “They Play Because They Love It.”

Rafael Nadal is tied on 20 majors with Roger Federer and world no.1 Novak Djokovic, who are both absent from the tournament.

A second Australian Open title will be special for Nadal. It will also make the Spaniard only the second man after Djokovic to win each of the four Grand Slam titles twice since the sport became professional in 1968.

Rafa defeated Marcos Giron and Yannick Hanfmann to reach the 3rd round of the Australian Open. He reached there for the 16th time in his career in the Slam down under.

In the press conference after his win against Hanfmann, Nadal was asked about his third round opponent. 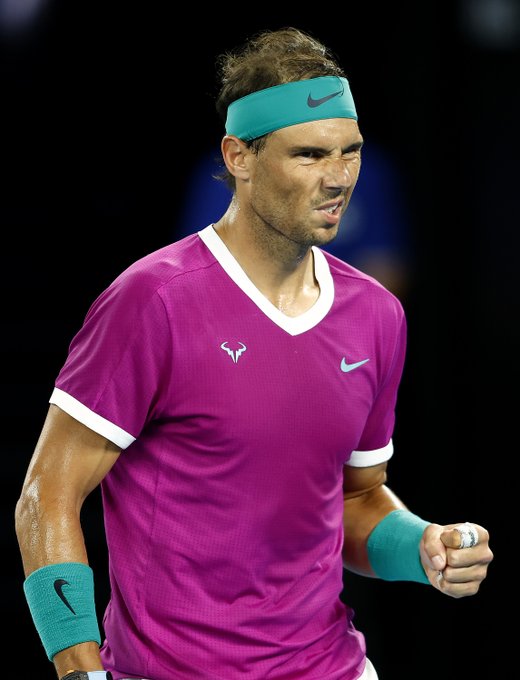 “ In my situation today going to be even more. I never think that far. You can imagine now less than ever, no? Just staying focused on my daily work, on what’s coming, and that’s it. One moment in time, that’s it,” he added.

Nadal Answers About His Future Plans

The German did slightly better at the Rod Laver Arena but it was not enough to trouble Nadal. Rafa hit 30 winners and broke his opponent’s serve four times in the match while saving both breakpoints he faced.

People started to question Rafa’s future in the game because of his age. To those questions he answered, “Well, the positive thing is I achieved much more than I ever dreamed. I was able to spend almost 20 fantastic years on the tour. The rest of the things nothing positive because arrives in the end.”

“When you get older, the watch never stops, no? That’s the circus of life. You need to accept that. But it’s all good with me with that. I don’t know. I am in the third round and I need to win very tough matches to be there. Is not in my mind now. I have enough work I don’t like.” the Spaniard said.

“You Are Lying, You Didn’t Knock Me Out”- Ciryl Gane Gets Into a Heated Argument With Francis Ngannou at UFC 270 Press Conference