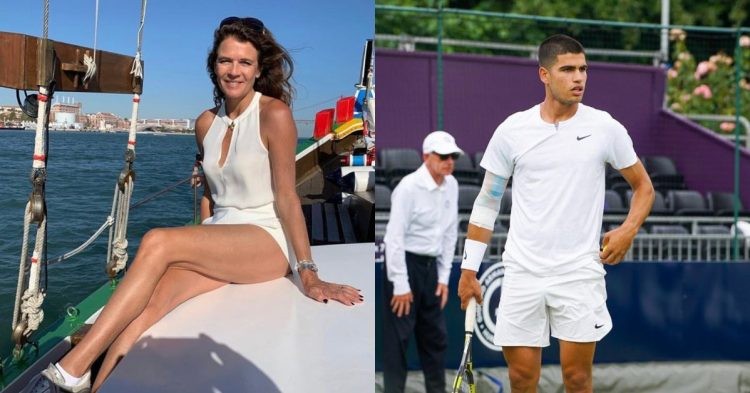 Former British tennis player Annabel Croft has seen many players come and go. She has herself tasted success in tennis and has risen to the career-high rank of 24. Croft is particularly excited about this year’s Wimbledon with many young stars threatening to dethrone the established players.

Following the draw for Wimbledon, several potential blockbuster showdowns are on the cards including another Alcaraz vs Djokovic special #tennis https://t.co/z2EabpNvcm

When asked who can be the star in the men’s singles category, Croft said the name of Carlos Alcaraz first. Alcaraz has been in the headlines ever since he won back-to-back ATP tournaments. The Spaniard won the Barcelona and the Madrid Open to rise to his career-high rank of number six.

He had a disappointing French Open campaign after he crashed out against Alexander Zverev in the quarterfinal. During the exhibition matches before Wimbledon, he was seen sporting heavy strapping on his elbow. However, he has insisted that it was just put as a precaution to avoid injury.

Many have said that Alcaraz looks like a culmination of Nadal, Djokovic, and Federer. Croft was on the same page when she called him a “hybrid of all the best players you have ever seen in the game.” Moreover, she said, “I think Carlos Alcaraz, the 19-year-old Spanish player, is really the new kid to watch.”

It has been a long time since someone outside the big four (Federer, Nadal, Djokovic, and Murray) has gained so much attention. Alcaraz, coming from Spain is touted as the next Nadal. He can dominate everyone else in the game if he doesn’t take the pressure of this newfound stardom.

Moreover, Croft said, “He has beaten Djokovic and Nadal. I think he is going to be a big star at Wimbledon this year”. The main reason why Alcaraz shot to fame was the way he won the Madrid Open. He beat Djokovic and Nadal in the quarterfinal and final respectively and clinched the title by beating Zverev in the final.

Just like Croft, many are pinning their hopes on Alcaraz as the next big thing in tennis. It will be seen in the coming years starting with this year’s Wimbledon which will start on June 27th. The young teenager is seeded fifth in the tournament and will face Germany’s Jan-Lennard Struff.