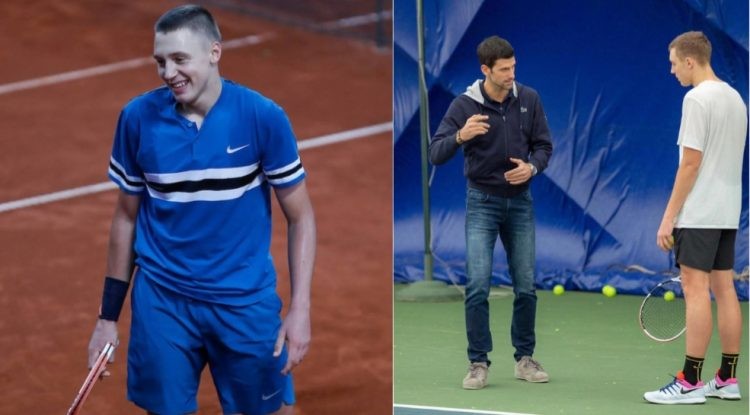 Hamad Medjedovic is a 19-year-old Serbian tennis prodigy. For the betterment of his tennis career, he is being supported by Novak Djokovic. He trains at the Novak Djokovic Tennis Academy in his country. Nole has been with him since the beginning of his career. He has said that he will support the 19-year-old to reach his full potential in his career. Despite the help, Medjedovic and Djokovic are not related to each other by blood. The world no.7 is like a mentor to Hamad who is helping him move forward in his career by providing financial support.

Medjedovic trained with Novak Djokovic in Nole’s tennis academy. He said, “It means a lot to train with him because it gives you the confidence to see that you can put up with him to a certain extent. He came up to me, and hugged me before he left.”

Fans and pundits around the world believe that maybe the public pressure influenced Hamad Medjedovic not to play as he did against Harold Majo previously in the tournament. He lost the first set in just 24 minutes, while in the second set he offered only a little resistance.

The Association of Tennis Professionals ranks Hamad Medjedovic as world no.259. According to Tennis World USA Hamad’s father, Eldin Medjedovic said, “Novak is really trying hard to help Hamad. In every possible way: financially, mentally, and socially. I remember my second conversation with Novak. Then we specifically talked about the steps in Hamad’s career.”

He added, “And here, I’ll tell you honestly, I pinched myself during that conversation to convince myself that all this was happening. He was giving me ideas, about what to do about Hamad.”

Eldin said that the world no.7 has provided financial, mental, and social support to his son. Eldin also revealed what Nole has said to him regarding his son’s career and how he will continue to help Hamad. He said, “Novak told me: ‘Edo, I don’t do this for money! I have a place to earn money. Simply, my role and my task are to help. What kind of person would I be if I didn’t help children who deserve it.’”

Novak Djokovic is very eager in supporting the newer generation of tennis players. His promise to the Medjedovic family to support Hamad in his career has received positive reactions from people around the world.