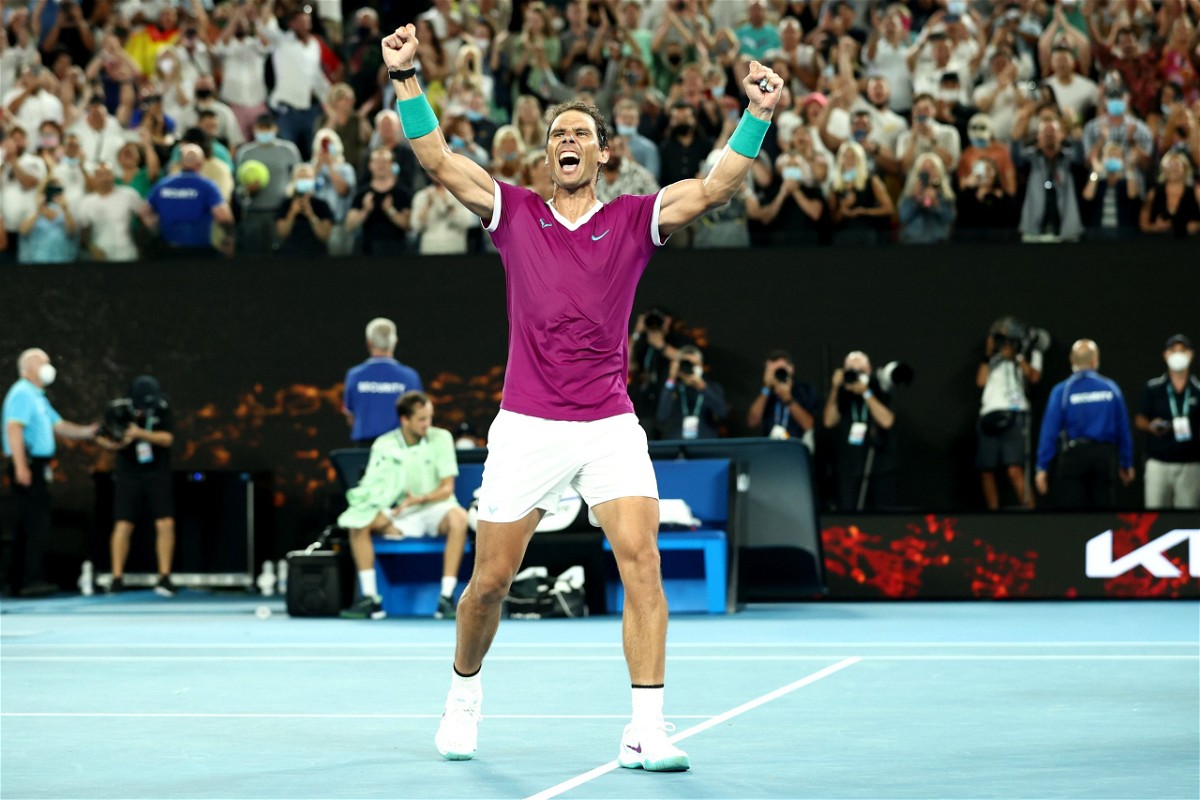 Rafael Nadal after his win against Daniil Medvedev

After over five long hour match, the Spanish player Rafael Nadal triumphed over Daniil Medvedev to reclaim the Australian Open title after 13 long years, last being in the year 2009.

Making an insane comeback after the first two sets, Nadal went on to emerge victorious by winning the last three sets. The second seeded player, Medvedev had the match in his favour at the beginning of the game, when he won two sets in a row.

However, Nadal being the experienced player he is, jumped back on track to succeed in the following two sets taking the match to the final decider set.

Despite facing multiple aces by the Russian athlete, Rafael rose above them with his forehand winners throughout the game. The figures at the end of the match was as follows (Nadal-Medvedev)- 2-6, 6-7, 6-4, 6-4 and 7-5.

Not only Rafael ended his 13 years drought of the Australian Open title, but also became the first man to claim 21 Grand Slam titles during the course of his professional tennis career. The other two of the Big Three- Novak Djokovic and Roger Federer are still tied at 20 Slam titles in their career.

The Australian Open 2022 Runner- up Daniil Medvedev expressed it was tough to talk after five hour and thirty minute match.- “I was amazed, especially, during the match I tried just to play Tennis. But after the match I just, you know, asked him like , ‘Aren’t you tired?’ Because, it was insane. I think the level is very high, you raised your level after two sets.”

Daniil further added that he thought Rafael would be tired, but he was ‘maybe a little’ tired during the match. He stated referring to Nadal- “You are an amazing champion,” and congratulated him and his team for the success. He also said that he missed his wife in the box today, but guessed that ‘the TV would be broken,’ before thanking her.

On the other hand this year’s Australian Open champion Rafael Nadal started his speech by congratulating his opponent saying that he himself was in Medvedev’s position for a couple of times, where he could have had the trophy. Rafael added that he was glad to share the ‘one of the most emotional matches of his career’ with Daniil.

“For me it’s just amazing. Being honest, one month and a half ago, I didn’t know if I will be able to be back on the tour, playing tennis again. Today I’m here in front of all of you, having this trophy with me, and you really don’t know how much I fought to be here.”

“You are just amazing.”

The Spaniard expressed gratitude towards the spectators- “I can’t thank enough. All the support that I received since I arrived here. You are just amazing.” He thanked his team and family for their support in his ‘low moments.’

“One month and a half ago, probably I would have said that maybe there’s a chance that, that’s gonna be my last Australian Open. But now, that’s plenty of energy to keep going.” Rafael thanked everyone yet again before stating- “I really can’t explain the feelings that I have right now. But I’m gonna keep trying my best to keep coming next year.”

The Spaniard who kicked off his calendar year with a spectacular win at the Australian Open, will be looking forward to claim a Calendar Slam.