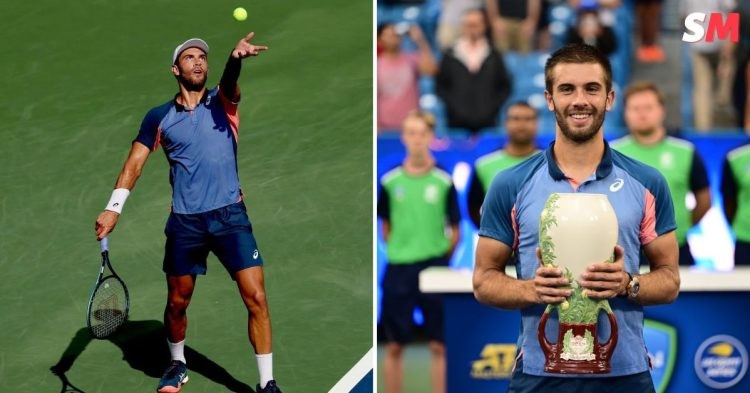 Borna Coric has been struggling with a shoulder injury for quite some time now. He missed most of 2021 due to the same and has not been able to play to his potential in 2022 as well. The Croatian tennis player even withdrew from Wimbledon after his shoulder started troubling him again.

However, all of this changed when he participated in the Cincinnati Masters. He beat Rafael Nadal in the first round and defeated Stefanos Tsitsipas in the final to lift the title. After an unbelievable tournament in Cincinnati, Coric revealed the biggest reason why he won his matches including the final against Tsitsipas.

He credited his serve as the differentiating factor between the two. During the post-match interview, he said, “This week I was mostly just serving unbelievable. The best in my whole life. In the important points I was always serving big. If I serve like that, I can relax more on the return and play much better tennis.”

Ever since his shoulder injury, Coric has spent more time recovering than playing on the court. Even while playing tournaments, he crashed out of tournaments in the first week itself. Therefore, playing continuous matches and winning the tournament can be stressful for the body. Coric will take some time off the court to give some ample rest to his body.

Furthermore, he said, “I need to rest first. It has been a tough week for me, I’m not used to this, I did not play for a very long time. I did not have this kind of stress on my body for a long period of time.”

After he is done resting, Coric will shift his focus to the US Open. Winning the Cincinnati Masters has given him confidence that he has what it takes to win the grand slam later this month. He said, “I’m going to rest and then shift focus on the US Open. I’m going to try to prepare the same like for this tournament.”

Coric’s journey at the Cincinnati Masters has been an inspiration for many people. His comeback after months of shoulder injury is truly remarkable. Many tennis will root for him to win the US Open.