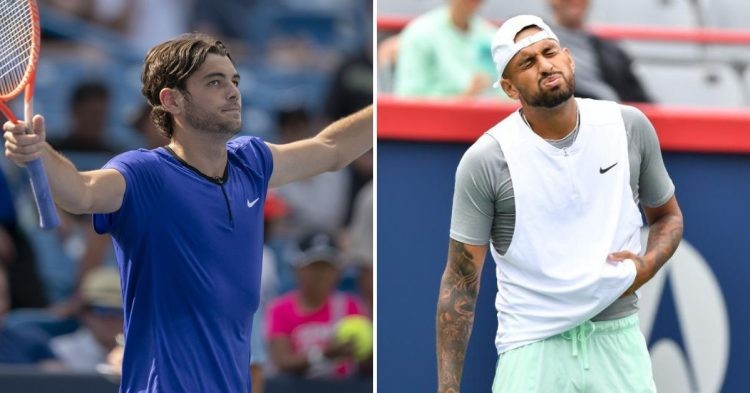 It looks like Nick Kyrgios is going through fatigue right before the US Open as he lost in straight sets to America’s Taylor Fritz in the second round of the Cincinnati Masters. The match only lasted for 51 minutes as Fritz won the match 6-3, 6-2.

After winning the Citi Open a few weeks back, Kyrgios has been struggling with form as he exited the Canadian Open as well in the quarterfinal. As per Kyrgios, it has been a long tour for him, and is waiting for it to get over at the US Open. After crashing out of the Cincinnati Masters, Kyrgios might take a break to come back fresh for the US Open.

On Wednesday, @Taylor_Fritz97
and Nick Kyrgios squared off for the first time.

“A lot of things are clicking for sure.”https://t.co/1VjcOgpPyc

Taylor Fritz is happy with his performance against Nick Kyrgios

Fritz couldn’t have asked for a better performance and was content with the way he played against Kyrgios. With the US Open coming up in a few weeks, such a performance against a top-class player would give him a lot of confidence.

As per Tennis.com, he said, “That’s the kind of match I really needed to give me a lot of confidence. Going into the next match, going to the US Open, a lot of things are clicking for sure.”

Fab Fritz ✌️ @Taylor_Fritz97 blasts past Nick Kyrgios 6-3 6-2 to reach the last 16 at #CincyTennis for the first time! pic.twitter.com/SOdIdVJJQt

Going into the match, Fritz’s plan was to serve well as he knew he would have a hard time breaking Kyrgios’s serve. Moreover, he said, “I think the most important thing for me going out there was to serve pretty well and take care of my serve. Because if he kind of steals a break from you, then he’s really good at just holding serve, and he’s going to kind of run away with it.”

Fritz is definitely one of the players to watch out for at the US Open. Moreover, he had almost beaten Nadal at Wimbledon and has the potential to lift the US Open in the coming weeks.