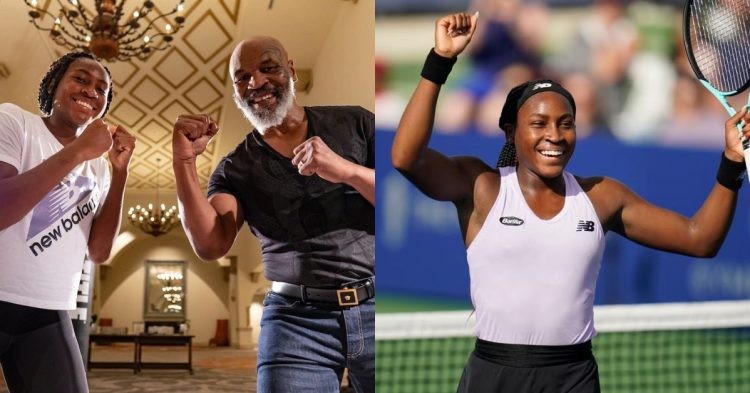 Coco Gauff, the 18-year-old American tennis player, is a respected athlete, and has achieved remarkable success in the sport despite her young age and has already been compared to the likes of Serena Williams and Venus Williams

She reached the fourth round of Wimbledon in 2019 when she was merely 15 years old, earning the respect of Tennis fans from around the world.

Coco has come clean on her training regime which for most tennis professionals seems unusual and irregular, throwing punches with boxing legend Mike Tyson before her Melbourne date with Emma.

While discussing her unorthodox training methods which might help her overcome Emma Raducanu’s challenge in the second round of the Australian Open 2023, Gauff wrote to BBC Sport saying “To help me follow in Emma’s footsteps and win a Slam, I added a new activity into my pre-season training – boxing.”

“My fitness trainer wanted me to box to help improve balance and so I went down to a gym near where I live in Florida,” added Coco more towards her curious training method.

Coco Gauff reportedly took up boxing training pre-season after acknowledging it as an effective way to improve heart rate and cardio statistics.

While establishing her first-hand experience at boxing, Coco said that she was worried to hit the gym, not because she hadn’t met Mike Tyson before but because her boxing skills were not up to the mark.

In her column for BBC Sport, Gauff wrote “The pre-season training was in a proper gym where there were professional fighters training and whenever they would come to watch I was talking really loudly – like, ‘yeah, my tennis tournament’ – so they knew I wasn’t a fighter.”

The 18-year-old professional has admitted that her fitness coach Stephane is constantly trying to come up with new ways to exhaust her and do an extra cardio session because her heart rate doesn’t stay high for long enough. Coco says she will be in this sport for potentially another 20 years so she wants to make it more fun along the way.

Boxing is not the only sport Coco has turned to in terms of adding a mix to her fitness regime, most recently adding boxing and swimming to her schedule. “As well as boxing, I did some swimming. For me, swimming is one of those things which gets me the most tired. I can run forever and do a lot of things forever, but swimming I feel like I’m done after two laps,” quoted Coco.

As a young and upcoming tennis player, she would take part in gymnastics and track programs as well to endure a fun experience out of the rigorous training almost every tennis professional undergoes.