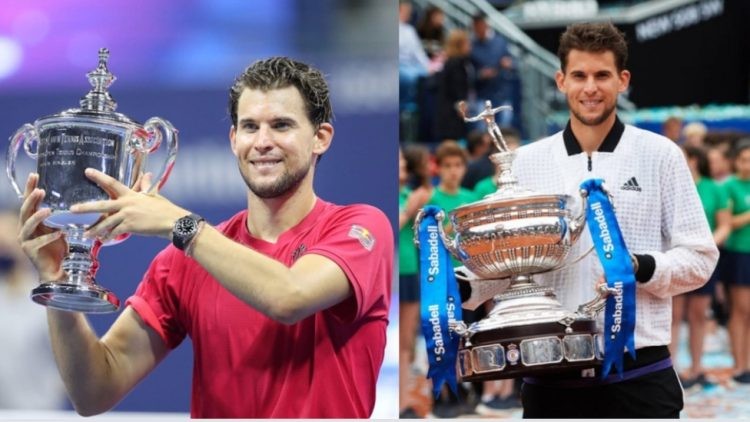 Austrian tennis player, Dominic Thiem entered his first event on the International Tennis Federation (ITF) junior circuit in early 2008 when he was 14. He is currently ranked world no.274 by the Association of Tennis Professionals (ATP). Previously, he has been ranked as high as world no.3 which he achieved in March 2020.

Dominic Thiem triumphed over Alexander Zverev in the 2020 US Open final, 2–6, 4–6, 6–4, 6–3, 7–6(8–6) to win the men’s singles tennis title. It was his first Major title and he became the first man to come back from two sets down in a US Open final in the Open Era, the first to do so overall since 1949. He is also the first to achieve this feat in any major final since Gastón Gaudio at the 2004 French Open.

At the post match press conference Thiem said, “I cannot realize it yet. But it’s definitely the biggest goal in tennis what I achieved, winning a slam title. There is nothing better than that and all the hard work paid off and also all the hard work of my family, of my team.”

He added, “I think today’s also the day where I gave back a lot. It’s a huge day for me. But also for everybody who was involved basically since the beginning of my life to get to moments like this.”

Both Alexander Zverev and Thiem served for the championship in the final set. Zverev at 5–3 and Thiem at 6–5, but both were broken at 30. This was the first time in history that the US Open title was decided by a fifth set tie-break. This took place 50 years after the rule was introduced in 1970.

Dominic Thiem’s victory made him the first Austrian to win a major singles title since Thomas Muster at the 1995 French Open. He is also became the first new male major singles champion since Marin Čilić won the 2014 US Open.

Daniil Medvedev faced defeat at the hands of Dominic Thiem in the final of the 2019 Barcelona Open. Dominic triumphed over Daniil, 6-4, 6-0 to win the men’s singles title.

Thiem made a slow start as he trailed 3-0 but then he progressed quickly to win four successive games and go 4-3 up. The Russian tennis star, Medvedev struggled to respond to the Austrian’s shots. After wining the title, at the post match press conference Thiem said, “It’s such an honour to win this tournament. Looking at all the names who have won it I’m very happy and proud that my name is also there now.”

Dominic said, “It’s unreal. It’s a pleasure to compete against Roger in this great final. I lost my last two Masters 1000 finals. But I won this one and it feels as nice as a Grand Slam.”

He added, “It was a great week and I think also a very good final today. Just amazing that I got here, my first really big title. I came from a really bad form in all categories and now I’m the champion of Indian Wells. It doesn’t feel real at all.”

It was the Austrian’s 12th ATP Tour crown in total and first on outdoor hard since the 2016 Abierto Mexicano Telcel in Acapulco.