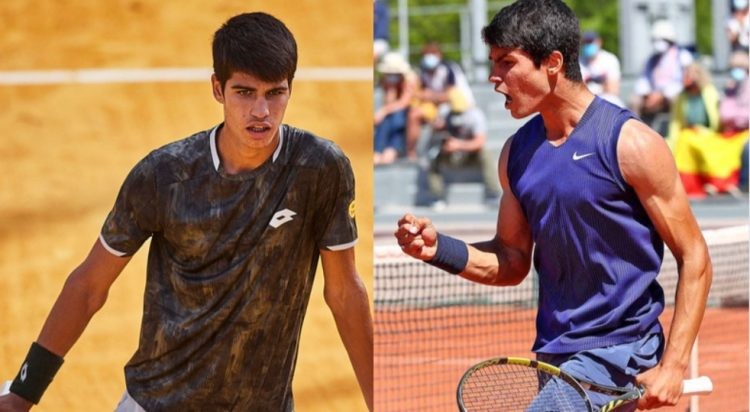 Alcaraz has only played eight full Tour matches on grass courts. Six of those Tour matches were in 2019 when he played on the ITF junior circuit. Only playing two as a pro last year at Wimbledon. The world no.7 will head into Wimbledon Open without playing any build-up tournaments on grass after pulling out of Queen‘s due to an elbow issue. During his clash with Frances Tiafoe the spectators noticed Alcaraz’s arm being heavily bandaged.

Being asked about the bandaged elbow at the post match interview Carlos said, “Well, it was just for precaution. A couple of weeks ago I had problems where I couldn’t train well. I trained without pain at Wimbledon and I felt good today. I had fun out there and I have more training ahead and another match on Saturday here.”

Starting his preparations for the 2022 English Grand Slam, Carlos Alcaraz participated in an exhibition match in the Giorgio Armani Tennis Classic in London.

Alcaraz has enjoyed a magnificent first half of 2022 when he became the youngest player to break into the world’s top 10 since Rafael Nadal did in 2005. He has a win-loss record of 32-4 and has already won four titles this year, including a Masters 1000 event in Miami. The Spaniard has beaten a top 10 player on eight separate occasions.

Carlos’ match against Frances Tiafoe worried his fans. His injured being heavily bandaged raised questions among fans. However, he said that him being bandaged is not a concern but a precautionary measure.

Fans on social media believe that is bandage would help him in winning the Wimbledon Open. The belief arises from the past ATP tournament in Umag, where Carlos had a similar tape around his elbow.

Carlos Alcaraz is fairly new to grass courts. However it will be interesting to see how the 5th seed fares on grass.