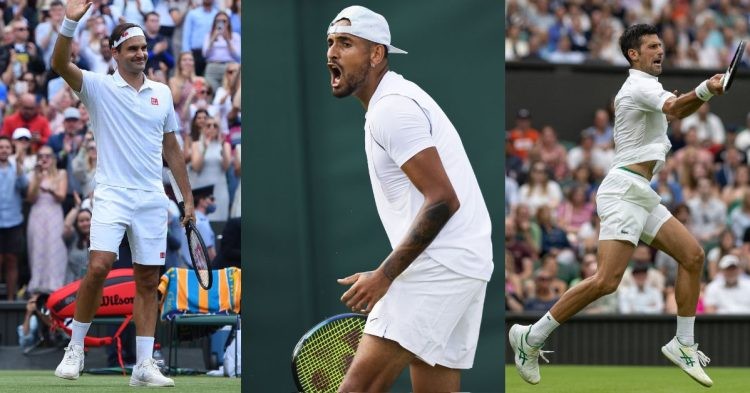 Nick Kyrgios had a pretty wild run at this year’s Wimbledon. He made it to the final of a grand slam for the first time but lost to Novak Djokovic in four sets. On the other hand, Djokovic won his 21st grand slam and went one ahead of Roger Federer in the list of total grand slams won by a player.

Despite Djokovic going past Federer, Kyrgios rates the Swiss above the Serbian. As per Kyrgios, Djokovic is not as brutal as Federer. Furthermore, he said during the press conference, “But he doesn’t make you feel as bad as Federer does at times. I think Federer out of the other three guys, Federer can make you feel really bad.”

Kyrgios revealed playing with Federer is much more challenging than playing with Nadal or Djokovic. While playing against the Swiss legend, he has felt like leaving the court multiple times. Moreover, Kyrgios said, “He makes you want to leave the court. He can make things seem really quick. The court is really small.”

Nick Kyrgios explained that when it came to Nadal and Djokovic, the two give room to play from the baseline. However, that is not the case when it comes to Federer. He said, “Where Nadal and Djokovic, they allow you to play a little bit from the back. If you’re playing not great, you struggle. But Federer can really take it to you and get you off the court real quick.”

“I don’t think anyone will fill those shoes.”

Kyrgios gave praise to The Big 3 prior to his Wimbledon Final. He said what I feel daily.

“Federer, Nadal, Djokovic: These guys are so rare.” pic.twitter.com/I1NEJquoyo

Federer, who has won Wimbledon a record eight times, did not play the tournament this year. He has been recovering from a knee injury and has been off the court for almost a year. On the other hand, Djokovic won his seventh Wimbledon title and is one away from equalling Federer’s record.

Furthermore, Kyrgios said, “I felt like, you know, to get to the final, there’s always a bit of anxiety of how it’s going to play out, if you kind of feel worthy to be there.” He was understandably disappointed with the result as he felt he could have won the trophy.