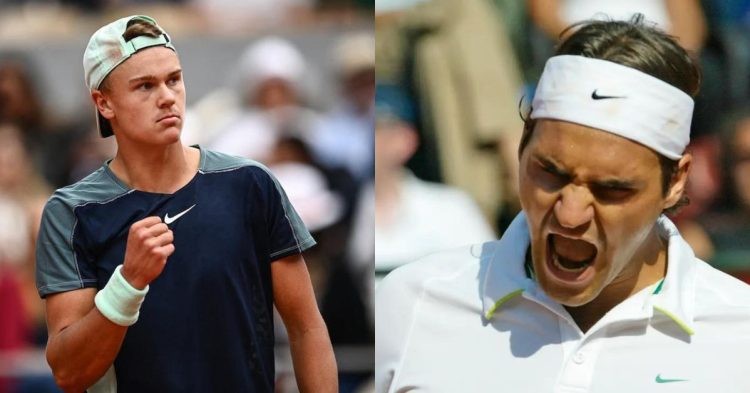 Holger Rune is an up-and-coming player in the tennis circuit. While he has earned a lot of praise for his natural talent, he has many haters due to his attitude on the court. He has made a reputation for being brash and unnecessarily aggressive.

In a recent interview, he was asked about his on-court behavior. Instead of accepting his mistake, Rune went all the way to defend himself. At one point, he compared his behavior to that of his idol Roger Federer when the Swiss legend was young and naive.

Rune. “Roger Federer always has been my idol. I love his game, his transitions to the net. To watch him play is so inspiring and very helpful to my game because I always wanted to do more things than hitting forehands and backhands”. pic.twitter.com/ZOSA4d7WG3

During the early days of his career, Federer was known for his anger and rage on the field. Bringing that to light, Rune said, “If you saw Roger Federer as a youngster, back then he was maybe 40 times worse than I was – and he is one of the most beloved tennis players on the tour.”

With time, Federer realized his mistake and is now known for his composure on the court even on bad days. He is the most loved player due to his humble and calm nature on and off the court. However, at no point was he as aggressive as Rune.

At this point, Rune also realizes that he does not have a good reputation among players and fans alike. However, he is convinced that he has enough time to clean up his act and improve his image. Moreover, he said, ” I think I have plenty of time to get an even better image (than Federer).”

Rune’s worst side came to light during the quarterfinal match against Casper Rudd in the French Open. At one point in the match, he shouted at his mother who was supporting him from the stands. He asked her to leave and went on to lose the match later.

After the match ended, he snubbed Rudd in the end during the handshake which again led to a lot of criticism. For Rune, his behavior only shows his passion for the game. He said, “It’s just that I have an extreme passion for tennis and sometimes I show it too much.”

“I’ve Beaten Him in All Matches,”- Nikolay Davydenko Makes Bold Statement on Playing Against Rafael Nadal