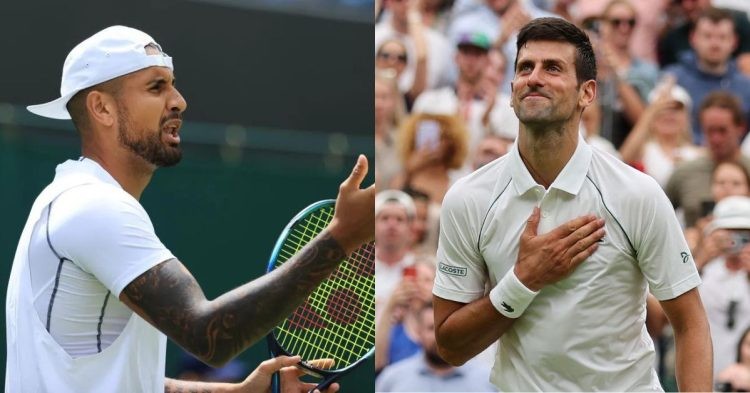 Nick Kyrgios lost to Novak Djokovic in the men’s singles final as the Serbian won his 21st grand slam. Kyrgios won the first set and it looked like the match was in his control. However, Djokovic powered through the next three sets to win the match.

Centre Court rises again for one of its great champions

During the press conference, Kyrgios candidly spoke about how he thought he could have won the match. Moreover, he said, “Played a hell of a first set and put myself in a position to, you know, obviously take a stranglehold of the match.” As per him, not capitalizing on key moments cost him the match as well as the title.

The Aussie also credited Djokovic for keeping his calm and not losing track even after losing the first set. As per Kyrgios, Djokovic won the match without doing anything extraordinary only because of his composure. He said, “He’s just really composed. It’s weird, I felt like he didn’t do anything amazing today. He returned obviously the way he returns. I feel like he’s just a great returner. But he was just so composed.”

As per Kyrgios, Djokovic’s greatest strength is that he doesn’t let anything affect him. Even after losing the first set, Djokovic was unaffected and came back stronger to win the match. Moreover, Kyrgios said, “I feel like that’s his greatest strength, he just never looks rattled. He just looks completely within himself the whole time.”

Even in pressure situations, Djokovic managed to come through while Kyrgios failed to hold his nerve. That eventually cost him his game. The Aussie further praised Djokovic and said, “I feel like he’s just a great returner. But he was just so composed. That’s what I was just thinking to myself. In big moments, it just felt like he was never rattled.”

Kyrgios will try to come back stronger for the US Open. Djokovic will most likely not be part of it as he is still not vaccinated and might not take the vaccine. Players like Kyrgios and Nadal have a great opportunity to win the next slam in Djokovic’s absence.