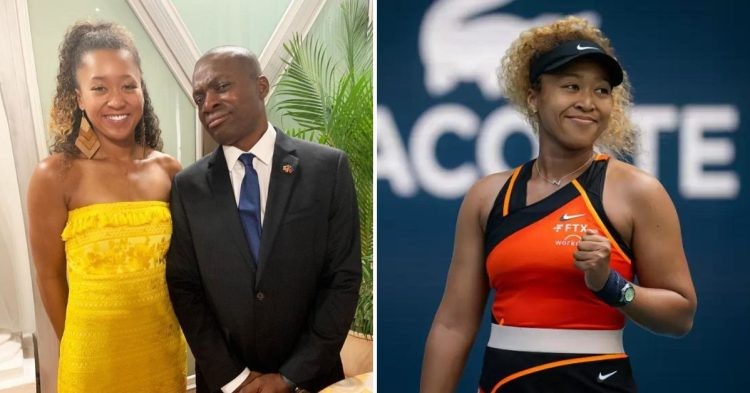 Naomi Osaka had been suffering from Achilles injury and it even forced her to withdraw from Wimbledon. However, she is back in court ahead of the US Open and is currently playing at the Silicon Valley Classic. She recently split with longtime coach Wim Fissette and there have been some interesting developments in that area.

As of now, Osaka’s father Leonard Francois has taken up the role of coaching her. During the start of her tennis journey, it was her father that taught her how to play the sport. After winning her first-round match against  Zheng Qinwen 6-4, 3-6, 6-1, Osaka gave a shout-out to her father.

As per Tennis.com, she joked in the post-match interview, “My dad’s right there. He’s the guy wearing sunglasses even though it’s dark outside! He said he’ll take the [coaching] role very seriously, but I don’t think it’s a long-term thing.” Francois also coached Osaka’s sister Mari when she started playing tennis.

During the post-match interview, Osaka praised Francois for bringing a lot of positive energy and making her smile before and during the match. It could have been one of the many reasons for her win at the Silicon Valley Classic.

S/o my dad for the bad jokes lol. Yesterday was really fun see you guys on Thursday 🥰🎾 pic.twitter.com/ndfQP6k46g

Moreover, she said, “He hasn’t been around in a little minute so this is our first tournament back together. It’s really good for him to be back because he always makes me smile. I don’t know why, but he’ll tell me things like, ‘You’re a tennis player. Play tennis!’ Like, I know that, you know what I mean?”

Osaka has previously talked about the role of her father in her career. In a past interview, she revealed that her father gets tensed while watching her game. She said at that time, “He doesn’t like watching my matches. I think it stresses him out because he, like, twitches every time I hit a ball.” With the US Open coming up, her fans have pinned their hopes on Osaka lifting her fifth grand slam in the coming weeks.