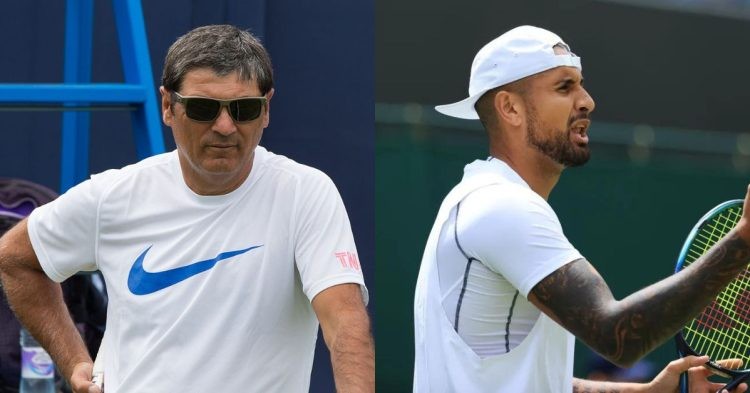 Toni Nadal is the reason why Rafael Nadal has 22 grand slams at the moment. After coaching his nephew for more than a decade, he parted ways to guide a young talent like Felix Auger-Aliassime. In a recent interview, Toni gave his take on why Nick Kyrgios lost to Novak Djokovic in the final of Wimbledon.

As per Toni, Kyrgios failed to curb his anxiety during clutch moments while Djokovic kept his calm. That was the primary reason why the match slipped away from his hand, allowing Djokovic to lift his 21st grand slam.

Furthermore, he said, “In the decisive moments he was unable to control his anxiety that, again, degenerated into constant rebukes to his team as if they were to blame for the undesired paths the scoreboard was taking for him.” Toni felt like Kyrgios was not perseverant and was looking for ways to end the rallies as quickly as possible instead of playing the game patiently.

Despite Nick Kyrgios falling just shy of Wimbledon glory, Toni Nadal has delivered a scathing assessment of the Aussie’s game.https://t.co/tEInYNbUfu

Moreover, he said, “The match lacked great brilliance, mainly because there were too many unplayed points. The lack of perseverance of the Australian, especially in regards to maintaining his aggressiveness, revealed the main problem that, in my opinion, his game possesses.”

Toni strongly feels that Kyrgios doesn’t have a good grip over his game. While the great players try to control their footwork and hit good shots, Kyrgios doesn’t seem to understand any of this. Toni further says, “Nick Kyrgios, with his messy way of understanding the game, is handicapped not so much by what he does with the ball, but by the way he wants to do it.”

Does Nick Kyrgios have a ‘messy way of understanding tennis’? Toni Nadal has given his opinion on what the Australian needs to work on to realise his potential.https://t.co/JxBlQIxB6f

He again came back to how Kyrgios doesn’t understand the basic concept of tennis. For Toni, tennis is about hitting the shots in the same direction and waiting patiently for your opportunity to strike. However, Kyrgios tends to do the opposite of that.

Nadal’s former coach said, “It is very difficult for him to achieve the continuity that requires scoring points. Tennis is a sport of repetition, rather than the spectacular.” Kyrgios could learn a thing or two from Toni considering he shaped a legend that we now know as Rafael Nadal.