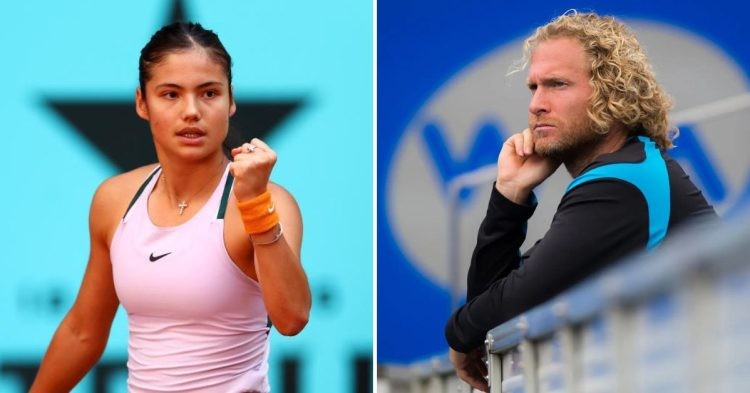 Emma Raducanu has a title to defend when she plays the US Open this year. She has had a tough year as she was constantly changing coaches. However, she has finally roped in Dmitry Tursunov as her coach and is excited to work with him.

She is currently playing the Citi Open where she beat Louisa Chirico in the round of 32. She won the match in straight sets but it was not a very convincing victory. Even Raducanu was quick to realize that she did not play to her potential.

Furthermore, she said, “I didn’t necessarily play like a wizard today, but I got through it and I fought, and that’s all that matters.” Ever since the US Open victory last year, Raducanu’s performance has been lackluster. However, she has continued to work hard and will give her best to defend her title in the coming weeks.

Dmitry Tursunov is already helping Emma Raducanu as her coach

It has not been long since Tursunov took over as Raducanu’s coach. However, the Brit star has admitted that he has already helped her a lot in such a short span of time. Lack of consistent coaching was one of the reasons for Raducanu’s below-par performance.

As per Tennis.com, she said, “He definitely has a good sense of humor, and he’s definitely trying to make me take things easier on myself. I put a lot of emphasis on everything I do, and I want to do it the best of my abilities all the time.”

As per Raducanu, she has always been a perfectionist. That is exactly where Tursunov is working with Raducanu. Moreover, she said, “He’s just slowly trying to shift me towards, ‘If it’s not perfect, it’s okay. If you shank one, it’s okay.’ Just these sorts of things, and being more accepting of that.”

Tursunov is now training her to accept that there will be shortcomings and everything doesn’t need to be necessarily perfect. Raducanu thinks such type of mentality is helping her and it could probably fetch her another US Open.