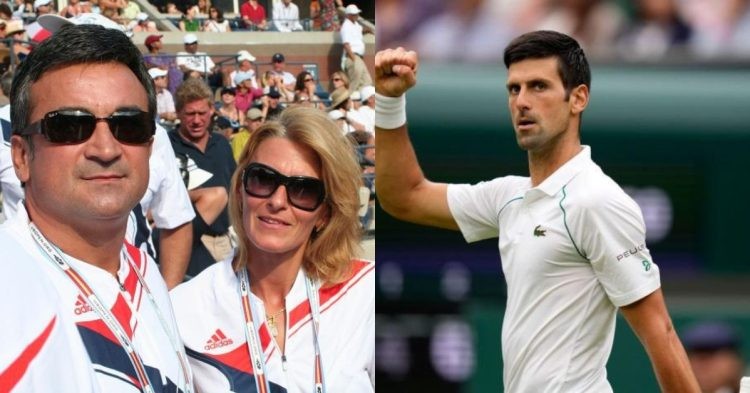 Novak Djokovic recently lifted his seventh Wimbledon title and took his tally of grand slams to 21. However, many people have played an instrumental role in his success. His parents are probably the biggest reason why he is now considered one of the legends of the sport. Here we explore the parents of Djokovic who realized the true potential of their son and helped him unlock that potential.

Djokovic’s father Srdjan hails from Serbia and is often seen supporting his son from the stands. During his young days, he was a professional skier and ski instructor. After his marriage to Djokovic’s mother, he shifted his profession to start a restaurant and a sports equipment store in the Serbian mountains along with his wife.

Srdjan has been a controversial figure because of his hate for Federer. He has openly said that he does not like the Swiss legend. As per Srdjan, Federer bullied his son when he was a teenager. Djokovic has never commented on the issue and maintains a good relationship with Federer.

Djokovic’s mother Dijana Djokovic originally hails from Croatia. Not much is known about her time before marriage. However, after marriage, she was an equal part of the restaurant. Both Dijana and Srdjan were supportive of Djokovic’s tennis career.

In fact, it was Djokovic’s parents who saw his talent and encouraged him to pursue it. They even sent him to a tennis camp organized by the Teniski Klub Partizan. Inside the camp, Yugoslav tennis player Jelena Gencic spotted Djokovic’s talent and groomed him as a tennis player.

How many siblings does Novak Djokovic have?

Djokovic has two younger brothers Marko and Djordje. Both of them have tried their hand at professional tennis. However, they couldn’t reach the level of their elder brother. Marko was the middle child out of the three. He was part of the Serbian team for the Davis Cup against Croatia in the quarterfinal in 2010.

Djordje, on the other hand, has seen not played even at the level of Marko. His highest professional achievement as a tennis player was when he reached the doubles quarterfinals at the 2015 China Open. All of his family members, along with his wife and kids, form the core of Novak’s support system.