“How On Earth Did He Win That?” – Christine Evert in Awe of Rafael Nadal’s Australia Open Win Rafael Nadal with his trophy at Australian Open 2022

The American is still in ecstatic with Rafael Nadal’s Australia Open win over Russia’s Daniil Medvedev. He broke a three-way tie with Roger Federer and Novak Djokovic by claiming his 21st Grand Slam title. 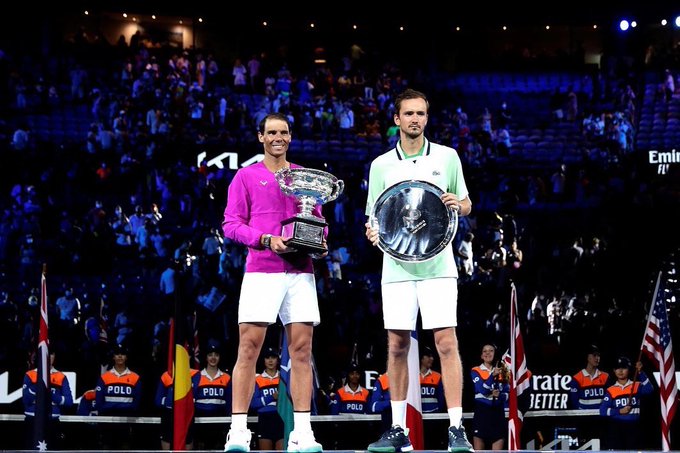 Nadal was side-lined with a recurring foot injury since last May. He even had to undergo an operation that left him on crutches just four months ago.

In December 2021, Nadal suffered from a breakthrough case of COVID-19. Following his first-round victory at the 2022 Australian Open, he told Eurosport Spain, “A month and a half ago I didn’t know if I would play tennis again at a professional level due to various factors, including the problems I’ve had with my foot and with COVID.”

Even after a week of his win, Christine Evert is feeling the excitement of the historic win. She tweeted, “Still mulling over Rafa’s win at the @AustralianOpen How on earth did he win that????”

Rafa in his post-match speech said, “One month and a half ago, I didn’t know if I was going to be able to be back on the tour playing tennis again.”

“And today, I am here in front of all of you having this trophy with me and you really don’t know how much I fought to be here. I can’t thank you enough for all the support that I received since I arrived here.”

Rafael Nadal along with Roger Federer and Novak Djokovic make up the generation-defining Big Three. They have dominated the professional tennis circuit for well over a decade now.

With Nadal winning his 2nd Australian Open title, he broke the Grand Slam record that he, Djokovic and Federer held in a tie at 20 titles each.