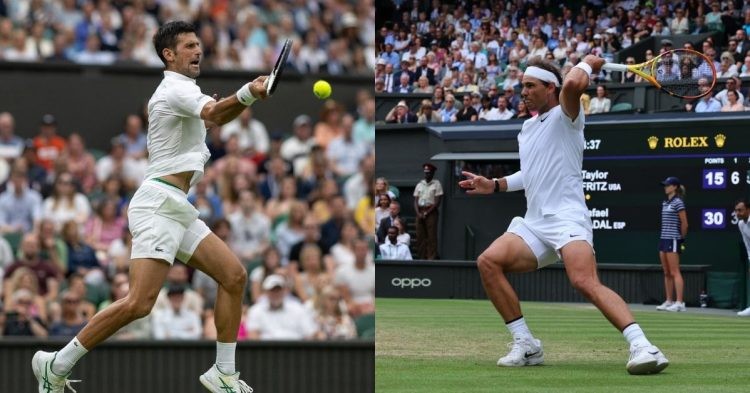 Novak Djokovic will play yet another Wimbledon final of his career. He will take on Australia’s Nick Kyrgios in the final of the tournament. Kyrgios advanced to the final without playing the semifinal match as his opponent Nadal withdrew from the match due to an abdominal tear.

Before his final match, Djokovic talked about Nadal’s withdrawal from the tournament. The Serbian opened up about a similar injury he encountered last year during the Australian Open. As per Djokovic, the location of the abdominal tear determines whether the player can play any further or not.

Moreover, he said, “I heard that it is an abdominal muscle tear, but I do not know which muscle. I tore an oblique muscle on my left side during the match against Fritz. It is clear that it is extremely hard to play under those conditions.”

Djokovic also went on to praise Nadal for winning the quarterfinal match despite suffering from an injury. The former number one said, “I give Nadal a lot of credit for the way he fought and won that quarterfinals match with that injury.”

Djokovic revealed that the abdominal tear during his Australian Open win in 2021 will come out as a documentary in October. Furthermore, he said, “Various reasons delayed the documentary, but we finished shooting one month ago. The material is now being edited.”

Djokovic to talk about pain killers, medical procedures he has used to maintain his body in his documentary.

There are suggestions he was using pain killer injections to manage elbow pain a few years ago as well as AO abdominal tear. Interested to seen his Olympics pain issues pic.twitter.com/DyyfgMVceb

Talking about his injury at that time, Djokovic revealed how he took a lot of painkillers to offset the pain. He then went on to win the Australian Open and also won the French Open and Wimbledon in 2021. The Serbian said, “I can say that it was extremely difficult.  I drank every painkiller there is in this world, had every possible therapy and treatment, was hooked up to machines.”

Djokovic’s documentary might also cover the vaccine controversy he encountered before this year’s Australian Open. The documentary will give an insight into the life of a legendary player like Djokovic.