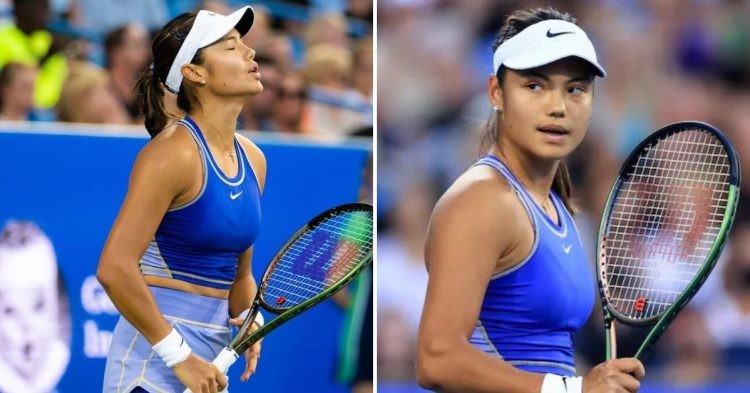 Emma Raducanu played two amazing matches at the Cincinnati Masters as she beat veterans like Serena Williams and Victoria Azarenka in straight sets. However, her dream run came to an end when she lost to Jessica Pegula 7-5, 6-4.

While the defeat is not good for Raducanu who will defend her US Open title in the coming weeks, she looked at the positives and was happy with how she played. She admitted that it was after a long time that she felt really good about her game.

🇺🇸 @JLPegula stops Raducanu’s run and reaches the quarterfinals at the @CincyTennis once again! pic.twitter.com/46T8HBFjSq

As per Eurosport, Raducanu said, “This week was a great step for me. In the past year it’s probably like the first tournament or like one of the few tournaments that I have actually started going for my shots more.” After exiting the Cincinnati Masters, the British number one will now shift her focus to the US Open.

While Raducanu exited the Cincinnati Masters, she is happy and proud of how she played in the tournament. More than winning the tournament, her aim was to take risks and play freely even at the cost of making big mistakes.

Moreover, she said, “This week I kind of just was like, ‘look, I’m just going to try, I don’t care if I make errors, like it’s fine, but I’m just going to overhit if anything’. I’m pretty proud of how I did this week, and I think it’s a great step to move forward.”

Raducanu is now focusing all her efforts on defending her US Open title! https://t.co/u8UEUOb1Tv #CincinnatiOpen #Raducanu #tennis pic.twitter.com/9GVhAdGK0g

Raducanu has a big task of defending her US Open title in the coming weeks. As per her, she is almost ready and just needs to find the right balance in her play. She said, “So it feels really good. I think that I can really take it as a positive week, and I actually feel like I’m heading in a good direction again.”