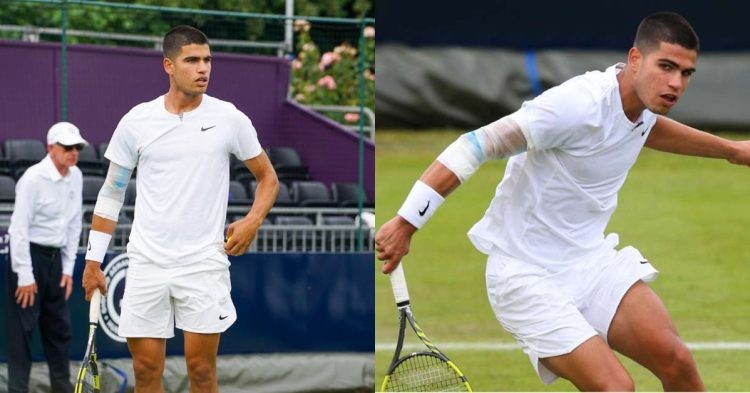 Spaniard Carlos Alcaraz is gaining a lot of attention as the next big thing in tennis after Rafael Nadal. He also hails from Spain and has played some phenomenal tennis this year. However, he really had to fight for every point in the first round of Wimbledon.

The 19-year-old played Germany’s Jan-Lennard Struff in the first round and the match stretched to five sets. Alcaraz eventually came out on top to advance to the second round. Grass is not his strong side but he is constantly improving.

During the post-match interview, Alcaraz was asked if he felt any pressure playing this time now that everyone expects a lot more from him. However, the Spaniard replied he is not taking any pressure as he knows he is not the best in grass courts. Furthermore, he said, “I don’t feel the pressure because I don’t consider myself one of the favorites to win the tournament.”

Carlos Alcaraz thinks he has what it takes to win Wimbledon

Many former players see Alcaraz as a mix of Nadal, Djokovic, and Federer. He has the potential to make it big in the world of tennis. Even Alcaraz is confident that he has what it takes to lift the Wimbledon title. However, he is not delusional and realizes that there are far more experienced players in the tournament.

Moreover, he said, “If I play well, I have the level to win it, but there are many more experienced players on the grass who play better.” Novak Djokovic and Rafael Nadal are probably the most experienced grasscourt players this time along with Andy Murray.

While Nadal and Djokovic are favorites to win the title, Murray is also playing some good tennis. However, Alcaraz is taking it one game at a time and is trying to enjoy the process. He said, “I just want to gain experience on grass and enjoy every match”