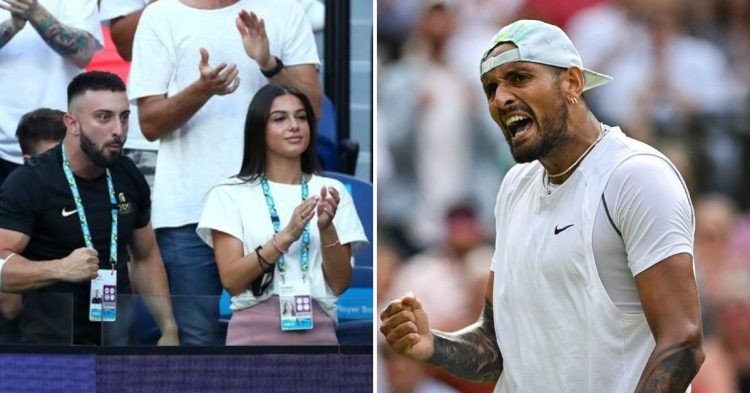 Nick Kyrgios is currently playing the best season of his career so far. He won the doubles grand slam title at the Australian Open and even reached the final of Wimbledon in the singles category. What is impressive is that he does not have a coach to guide him.

One might think that having a coach would have propelled his career to another level. However, he does not think the same. The Aussie star thinks he doesn’t need someone to tell him how to play his game as he already understands it well himself.

As per Tennis World, he said, “I’m a pro. Coach? Tactically when I play against my opponents I am always very warm. I watch a lot of tennis and I know my opponents’ weaknesses well, but nobody knows my tennis as well as myself, I don’t need someone to tell me what to do.”

Nick Kyrgios credits his team for his good performance

While Kyrgios does not have a coach by his side, he does have a team. It mainly consists of his family members and his girlfriend Costeen Hatzi. His side was always the focus when Kyrgios went through multiple controversies during Wimbledon.

Moreover, he said, “I have a healthy and loving relationship with Costeen who always supports me. We have a lot of fun together. My manager is one of my best friends, we have the same goals and I am training hard with him. It’s important to only think about tennis.”

Even Kyrgios acknowledges the fact that a coach is not as necessary as having a supportive team that backs him through thick and think. He said, “Maybe I just need a reinforcement on my staff, someone to give me some peace of mind. For me, tennis is all very simple, great serve and then I use my instinct later, that’s what works.”

After an amazing Wimbledon performance, Nick Kyrgios will look to emulate the same performance at the US Open. He is training hard and people can expect another drama-filled grand slam with Kyrgios.