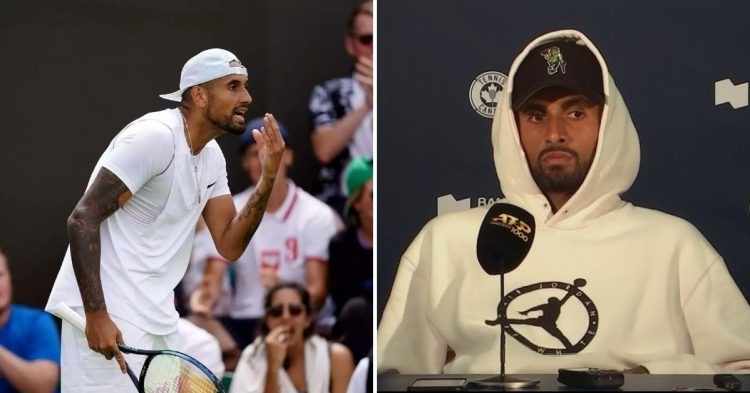 Nick Kyrgios‘ dream run at the Canadian Open came to an end after Hubert Hurkacz beat him in three sets. During the post-match conference, Kyrgios was asked about his feelings on fan and media interaction. Staying true to his character, Kyrgios had a rather candid reply to the question.

Kyrgios revealed that he always looks forward to interacting with fans and is excited to talk to them. However, when it comes to press conferences and media interactions, he is particularly not excited about it in the same way.

He said, “Yeah I mean the fans are great. I mean without the fans, there’s not really any excitement. There’s no sport really without fans. As for the media, I couldn’t care less.” Kyrgios is famous for his honest answers during press conferences. Therefore, his mini monologue dissing the media was not surprising at all.

Nick Kyrgios admits he does not enjoy post-match press conferences

As per the rules, players are bound to go for press conferences after their match gets over. If they fail to comply with this rule, they will be fined for the same. The rule is particularly harsh if the player has to go for a press conference after losing the match.

To be bombarded with questions right after a tough match can be mentally detrimental to the player. Players like Naomi Osaka have refused to give press conferences in the past and have faced harsh consequences of the same. Kyrgios was honest to admit that he only does press conferences to avoid fine and would avoid it otherwise.

“I couldn’t care less,” Nick Kyrgios takes a blunt approach towards the media after his loss at the Canadian Open https://t.co/O5xLDWwPqm #Tennis #NickKyrgios

Furthermore, he said, “I do this because I have to be here and I don’t want to get fined. I mean, it’s routine. I don’t really enjoy it, to be honest. I’d rather not be here right now.” Kyrios’ candidness was met with no follow-up question regarding the same.

It is fair to say that majority of players feel the same way about media interaction and would avoid it if given a chance. Only Kyrgios had the guts to say what every other player had in their mind.