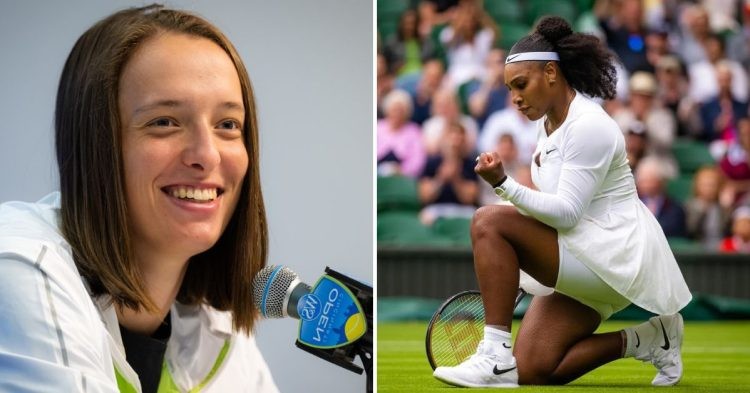 Iga Swiatek is one of the upcoming young players in women’s tennis who has risen to the rank of world number one at the age of 21. 2022 has been a phenomenal year for her as she won the French Open and extended her dominance as number one in the WTA rankings.

She is currently playing at the Cincinnati Masters as is one of the favorites to win the tournament. Amidst all this, her idol Serena Williams has announced her retirement from tennis after the US Open. Swiatek revealed during a recent press conference that she wants to say hi to Serena but feels shy around her.

As per The Statesman, Swiatek said, “I have a hard time catching eye contact with Serena. It’s tough because she always had so many people around her, and I’m pretty shy and when I look at her I kind of forget that I’m here as the world number one.”

Iga Swiatek wants to play Serena Williams before her retirement

Furthermore, she said, “It would be the last chance to play her. I’d love to, if only to see how it is to face her on the other side of the net.” While Swiatek is currently in good form, Serena has struggled to make an impact ever since her comeback.

Swiatek further went on to say that she feels like a small kindergarten kid when she sees the 23-time grand slam champion. Moreover, she said, “And when I look at her, I kind of suddenly forget that I am here as the world No 1. I see Serena and it’s, ‘Wow, Serena,’ you know? I feel like I am a kid from kindergarten just looking at her.”

Serena has inspired many women and Swiatek is one of them. While she is still in the early phase of her career, she is dominating other players just like Serena did during her young days. Tennis fans may soon see Swiatek rising to the status of tennis superstar.