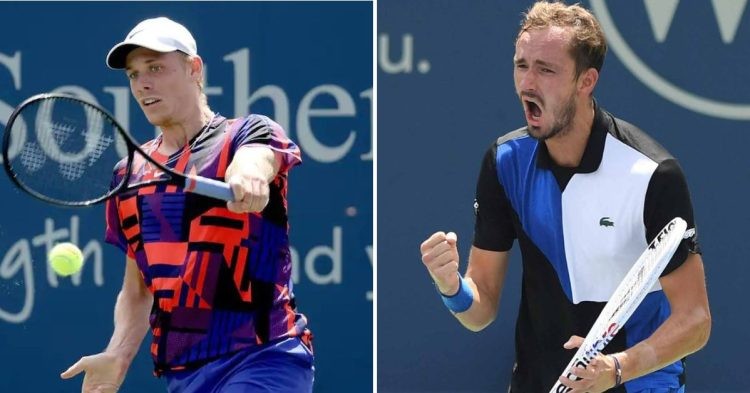 Daniil Medvedev is looking in good form ahead of the US Open as he beat Denis Shapovalov in the second round of the Cincinnati Masters. The match turned out to be a close one but Medvedev still managed to win in straight sets with a score of 7-5, 7-5.

After the match got over, Medvedev acknowledged that the match was tough but he managed to win by capitalizing on his opponent’s misses. He said, “The match was pretty tight. I felt that it was a great level. I felt that he was missing a bit more than me but making more points, but that is how Shapo plays.”

Despite playing a close game, Medvedev was happy with the level at which he played. With the US Open coming up, he would be happy with how is playing at the Cincinnati Masters so far.

As per Tennis World, he said, “My goal was to stay there every point possible and try and put pressure on him when I had the chance. But there were many points where I was just running across the baseline, trying to get back his shots. Generally happy with the level.”

Medvedev will next meet America’s Taylor Fritz in the next round of the Cincinnati Masters. Fritz has been in scintillating form and has beaten players like Nick Kyrgios in the tournament. Medvedev understands that Fritz is a dangerous player and will come prepared for whatever his opponent has to offer.

Daniil Medvedev is 34-3 vs American players throughout his career, 16-0 in matches played in US 🤯

Today he will face Taylor Fritz for a spot in the Cincinnati semis. pic.twitter.com/MQJIhmVogR

Furthermore, he said, “We have hit quite a few times. Before ATP Cup we had a session and I think he beat me, which doesn’t really matter, but I said to my coach, ‘Wow he can play really well, it can be a good year for him.’ Then he won Indian Wells.”

Medvedev is well aware that Fritz can beat him if he keeps any loose ends. He said, “He is an amazing player and I need to be at my best to try and beat him.” Medvedev will hope to win the Cincinnati Open to boost his confidence ahead of his title defense at the US Open.