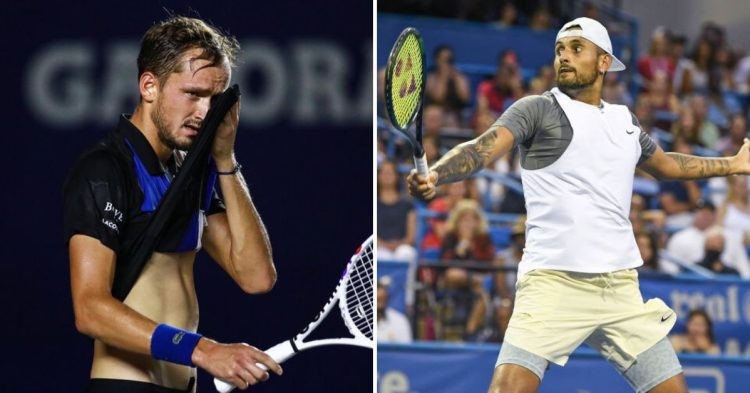 Tennis fans witnessed a mouthwatering clash between Nick Kyrgios and Daniil Medvedev in the second round of the Canadian Open. Kyrgios continued his form as he beat world number one Medvedev 6-7(2), 6-4, 6-2. Kyrgios recently won the Citi Open in the singles as well as the doubles section.

Kyrgios and Medvedev have met each other four times now. Kyrgios has dominated so far against the Russian with a head-to-head score of 3-1. The Australian tennis star was not intimidated by the ranking of Medvedev and gave his best to win the match.

As per ATP, he said, “This is the fourth meeting we’ve had and I’ve had some success against him in the past. But he’s beaten me before [as well]. I feel like we know each other’s games well. I’m not the type of player that goes into this match looking at rankings or anything like that, it’s just who I’m playing and what kind of ball they’re giving me.”

Nick Kyrgios reveals he had a clear plan against Daniil Medvedev

Kyrgios revealed that he had come prepared for whatever Medvedev had in store for him. He came up with a plan and stuck to it. That is probably why he was able to win the match and advance to the next round.

Furthermore, he said, “Today I had a very clean objective of how I was going to play, a lot of serve-and-volley, a lot of aggressive play from the back. I executed better than he did, that’s all it comes down to. He won the first set and I feel like I had opportunities there as well, so hopefully I can just keep this rolling.”