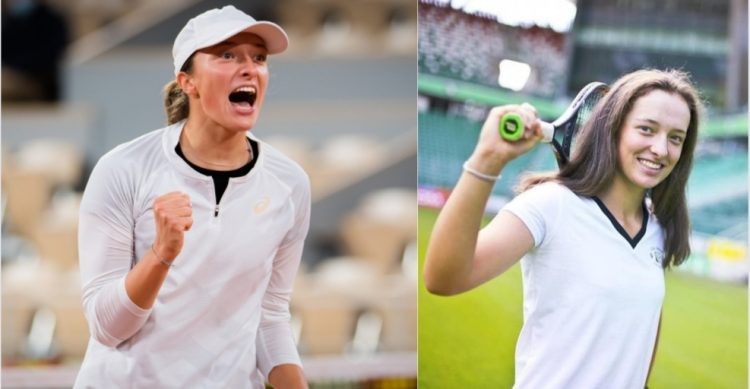 When Ashleigh Barty retired from women’s tennis, the tennis world got a new leader. Iga Świątek took over Barty. Her rise in the rankings has been steady and constant. She ended 2016 with ranked no.903, cracked the top 500 for the first time in 2018, ended 2020 ranked with no.17, and then gained no.9 spot at the end of last year.

Iga Świątek became the first Polish player and the youngest player since Caroline Wozniacki to hold the position. The Pole became the 28th different woman to hold the no.1 ranking since the computerised system debuted in November 1975.

A season to remember for @Iga_Swiatek 👏 pic.twitter.com/wtDrM0f0h9

Recently, the Polish star extended her stay in the top of the WTA ranking by winning the San Diego Open. She triumphed over Croatian player, Donna Vekic 6-3, 3-6, 6-0 to clinch the title. This title win was Iga’s 11th career singles title.

After the match at the press conference Iga said, “ I’ve worked hard with my coach and my psychologist to keep focused on those moments that make it easier to close the match. I just wanted to be proactive in making my shots.”

She added, “I wanted to be the one who hit the last ball in, use my patience more and not think too much.”

Iga Świątek now leads the Women’s Tennis Association rankings with 10,835 points after winning her 64th match. She is ahead of Tunisia’s Ons Jabeur (4,555 points) and Estonia’s Anett Kontaveit (3,796 points).

🏄‍♀️This is the best prize/trophy ever! Thank you San Diego for an amazing (cloudy😥) week and this unique vibe. I love it here.
And congrats @DonnaVekic for your amazing run! And sorry for waving my hands at the net. pic.twitter.com/SLwGiVM4zr

Recently Iga completed the Channel Slam. She became the first female plater to win the US Open, Roland Garros and Wimbledon back-to-back – since Serena Williams seven years ago. Successfully winning all three Grand Slams, Świątek became only the 7th women in the Open Era to do so. She has joined an exclusive group comprising of Serena Williams, Margaret Court, Evonne Goolagong Cawley, Billie Jean King, Chris Evert, Martina Navratilova and Steffi Graf.

By beating Coco Gauff in the 2022 Roland Garros final, Iga took on the joint-longest streak of this century, equalling Venus Williams’ record of 35 straight wins set in 2000. She has also steered clear of Serena Williams, who won 34 straight matches in 2013. She also became the 5th top seed to win the French Open in 25 years. Świątek is the only Polish tennis player to have won a Grand Slam singles trophy. The feat which she completed in 2020.