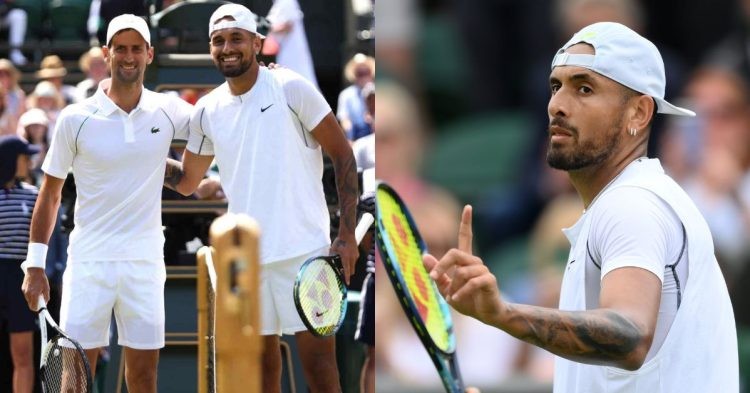 Nick Kyrgios and Novak Djokovic played in the final of Wimbledon this year. Djokovic won the final but Kyrgios put up a brave fight against the Serbian. Their relationship has seen a fair share of ups and downs. However, it improved for the better when Kyrgios supported Djokovic during the Australian Open controversy.

Before the Australian Open 2022, Djokovic landed in Melbourne without getting vaccinated. He had secured an exemption beforehand for the tournament. However, he got stopped at the airport and was deported back because of his vaccination status. At that time, Kyrgios was among the few to come out and defend Djokovic.

When asked about his current relationship with Djokovic now, he said, “Then I feel like when I stood up for him, he was surprised. Ever since then I feel like when the chips are down and someone comes out — what I did was not easy. I kind of went against my whole nation basically and spoke out about it.”

The past rivalry between Nick Kyrgios and Novak Djokovic

In the past, things have not been so good between the two. When Djokovic organized a charity event at the peak of COVID with no social distancing and a packed crowd, Kyrgios lashed out at the Serbian for being reckless. Djokovic eventually got COVID due to the event and it turned into a super spreader event.

In the past, Kyrgios has also called out Djokovic for always trying too hard to be liked by everyone. As per the Aussie, Djokovic wanted to be a global star of tennis like Roger Federer. In one Instagram live with Andy Murray, Kyrgios called the Brit better than Djokovic.

However, Kyrgios in the press conference, “I feel like we have a bit of a good relationship now. And I’m honored to go out there and battle with the best.” It looks like things have cooled off between the two. Djokovic and Kyrgios are now calling their friendship a ‘bromance’.