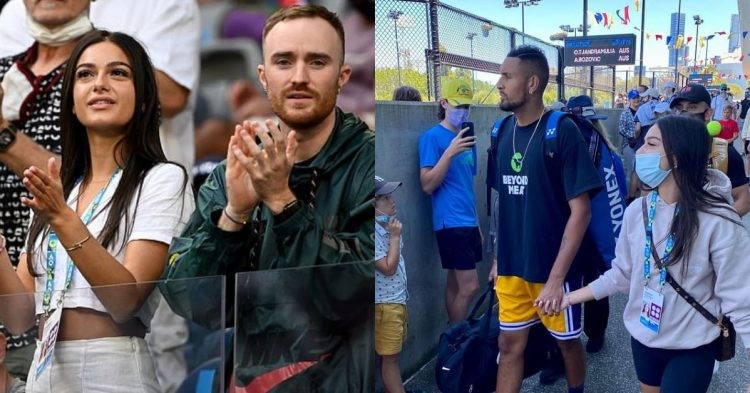 Nick Kyrgios came to the Center Court to play his first grand slam final. He had the mammoth task of beating Novak Djokovic in the final. Despite giving a tough fight, he lost the match and Djokovic lifted his seventh Wimbledon and 21st grand slam.

After the loss, his girlfriend Costeen Hatzi posted an Instagram story of Kyrgios and Djokovic at the Center Court. She wrote in the story, “Super proud. What an achievement, I love you so much.” Many of Kyrgios’ friends poured in with similar messages for the 27-year-old.

However, Kyrgios was obviously not happy about losing his first grand slam final. He reshared the story of his girlfriend in his story. Moreover, he wrote, “I love you tho but I’m sad.”

During the post-match interview, Kyrgios admitted that he and his team were exhausted from the amount of tennis he had played during the grass season. He said, “Myself, my team, we’re all exhausted. We’ve played so much tennis.”

Kyrgios and Djokovic share a rollercoaster relationship that is full of ups and downs. After years of not liking each other, their relationship has now improved into a friendship. Kyrgios even dares to call it a bromance now. After the match ended, Kyrgios only had nice things to say about his opponent.

During the interview, Kyrgios said, “I thought I played well, but first of all, congratulations to Novak and your team. I don’t know how many times now.” Djokovic is now only one behind Nadal and one ahead of Federer in the race for most grand slams.

In the past, Kyrgios has said that three-time grand slam winner Andy Murray is better than Djokovic, who won his 21st grand slam with a win over the Aussie. However, his views have changed over the years and he went on to call Djokovic a ‘god’ in tennis. He said, “He [Djokovic] is a bit of a god, I’m not going to lie.” Certainly, all tennis fans would agree with that.