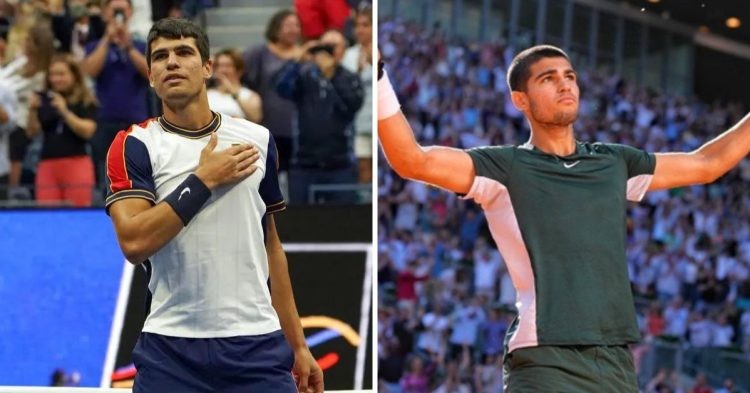 Carlos Alcaraz has seen tremendous growth this season and no one could have predicted it. After starting the season outside top 50, he is currently ranked at number 4 as per ATP rankings. Ahead of the US Open, he will play the Canadian Open where he is seeded second.

Even Alcaraz cannot believe the kind of leap he has taken this season. He is one of the hot favorites to win the title and he knows that he has the potential to lift the Canadian Open as well as the US Open. Even for someone like Alcaraz, seeding second for a tournament like the Canadian Open sounds insane.

As per Sportskeeda, he said, “I grew up so fast. To be the second seed at a Masters 1000 is amazing and I didn’t expect this at the beginning of the year. Honestly, I still can’t believe it right now.” While he is still in partial denial, people’s expectation of him has gone many folds in the past few months.

Carlos Alcaraz says it is challenging to change surfaces quickly

Alcaraz played on grass court during Wimbledon and it took him some time to get used to it. Following that, he played on clay courts for tournaments in Hamburg and Umag. Interestingly, he reached the final in both the tournaments and lost.

He will now play on hard court for the Canadian Open as well as the US Open. It can be pretty tough for players to accustomed to the continuous change of surfaces. Alcaraz admitted that he has found it challenging to win the constant change in surfaces.

“Did you expect to be so high so quickly?”

Furthermore, he said, “It is tough to change surfaces quickly. In two months, I have played on three surfaces and it is tough. But I consider myself a player who adjusts to a new surface very fast. The transition from clay to hard is tough, but I did specific work to adjust to hardcourt.”

With the US Open coming up in the next few weeks, Alcaraz will try his best to make the most out of the Canadian Open. He knows he can lift another ATP title this season and will give his best shot in the coming days.