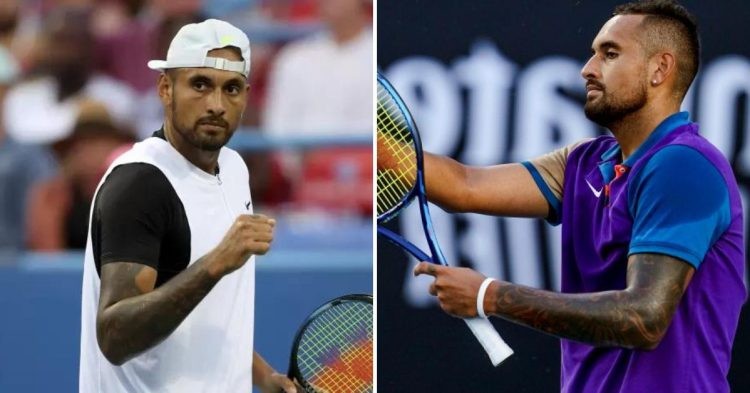 Nick Kyrgios is currently playing the Citi Open ahead of the US Open. However, he revealed in an interview the struggles he has gone through while playing in the tournament as an unseeded player. After winning his first-round match, Kyrgios revealed how he got drug tested at midnight.

He was set to face seeded-played Tommy Paul the next day and Paul did not have to go through any of that. As per Tennis World, “I think a seeded player doesn’t even play his first round. Last night, I played a first round, tough first round, and I got drug tested until 12:00 am midnight and expected to play tonight. He (a seeded player) gets to bed at the time he wants to get to bed.”

Kyrgios then played Paul next day and even beat him to advance to the next round. He also revealed how he was told to eat from a cafe when there was no food while his seeded opponent gets food delivered to his bed. The Aussie said, “I was told to eat in the cafe when there was no food. These are just things I think a seeded player won’t have to deal with.”

Nick Kyrgios feels he should be ranked in the top 15

Kyrgios is currently ranked 63rd in the world. He made it to the final of Wimbledon this year. However, no ranking points were awarded for it as ATP had stripped Wimbledon of ranking points for banning Russian and Belarusian players.

If ATP had awarded points for Wimbledon, Kyrgios certainly would have made a big leap in the ranking table. As per Kyrgios, he should ideally fall under the top 15 but that is not the case right now. He said, “I’m having a great year. I think if Wimbledon had points, I think I’d be around top 15, top 20 in the world.”

As per Kyrgios, he is playing the level of tennis which could easily break him into the top 5. Furthermore, he said, “I definitely feel like I’m playing that level of tennis. If not top 10, top 5 at the moment.” After his Wimbledon performance, Kyrgios is certainly not the underdog anymore.